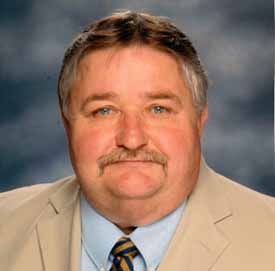 Stewart came to Ste Genevieve in 1983 as high school assistant principal, then served as principal 1986-1990.

He took over as superintendent during dire financial times.

“At the time we hired Mike, the school finances were in terrible shape,” said Garry Nelson, who was president of the school board in 1990. “But Mike tightened  everybody’s belt and got a few things passed and within about five or six years, the budget was strong again.

“He worked hard. When he retired, he left the school system in real good shape.”

Current superintendent, Dr. Julie Flieg, who was a student at SGHS when Stewart was principal, and who returned to the district as a teacher, then administrator under Stewart, shared some thoughts on him. She noted that the community had “suffered a great loss” in losing Stewart.

“He was first and foremost always an advocate for students in all that he accomplished throughout his life,” Flieg said. “Mr. Stewart took Ste. Genevieve R-II from the brink of bankruptcy to a school district that serves as a model for educational programs and facilities throughout the state of Missouri.