Amidst the strains of Pomp and Circumstance, a large crowd of family and friends crowded into Peggy J. Johnson Gymnasium to watch 127 Ste. Genevieve High School seniors receive their diplomas last Saturday night.

The SGHS Class of 2021 took part in the school’s 107th commencement. 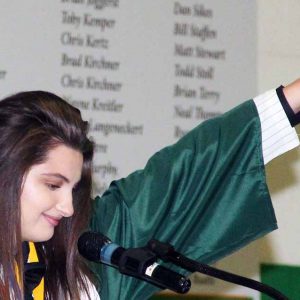 After Emma Johns, class president, marched the US flag in and led the crowd in the Pledge of Allegiance, salutatorian Alison Braun gave her address.

Braun  congratulated her classmates and gave credit to the SGHS faculty for being big influences on her.

“The teachers I saw in the hall every day became some of the most influential people I’ll ever  meet in my life,” she said, noting that they taught her “the importance of determination, positivity and effort.”

She warned that there would be failures as well as success along life’s road, but said that everything they had encountered during their school days had prepared them for where they were today.

Music awards were then given. Michelle Jokerst presented the National Choral Award to Nathan Ritter and John Mooney presented the John Phillip Sousa Award to Breanna Boyd and the Louis Armstrong Award to Finn Cavanaugh.

She thanked her parents, her sister, coaches, teachers and administrators for their support. 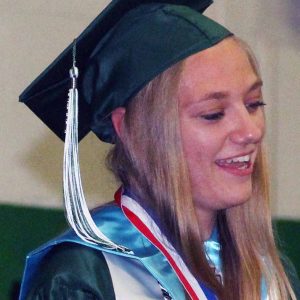 She also thanked mathematics teacher Cody Schwent for his “counseling sessions  and had special thanks for chemistry teacher Ian Diamond.

“I appreciated your sarcasm and intellectual wit too  much,” she quipped. “Whenever I was having a bad day, you always knew how to say something to make it worse. I wouldn’t have wanted our dynamics to be any other way.”

Four special awards were then given. The Danforth “I Dare You” Award for male senoir went to Keaton LaRue and the female award went to Emma Johns.