KENNETT — The Valle Catholic High School baseball team scored one run in the top of the second versus Kennett in the Class 4 Sectional Round Tuesday, May 25.

The Warriors had a chances to score even more runs.

However, such fortune didn’t quite materialize and Kennett eventually defeated Valle Catholic 9-1 at Indian Park.

“We had some chances to make it a closer game, or even take a lead,” said Valle Catholic head coach Nathan Gegg. “But, they made plays and made pitches in big spots. Their ability to get off the field, and their ability to keep their innings alive with two-out hits were the differences in the game.”

With Valle Catholic already in a deep 3-0 hole heading into the second inning, Carter Hoog doubled to right field with one out. 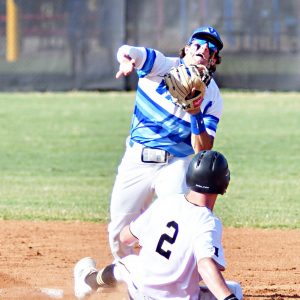 Josh Bieser singled on a liner; however, Hoog was held up at second base because there was still a chance Kennett centerfielder Brooks Nigut could catch the ball.

Drew Bauman grounded into a fielder’s choice, with Nathan Schwent — running for Bieser — out at second base. Hoog advanced to third on the play. Collin Vaeth, as he has done most of the season, came through with a clutch single to score Hoog and advance Bauman to second. Isaac Roth followed with a single to load the bases.

“We didn’t play our best game, obviously, and to beat Kennett we needed to do that,” Gegg noted. “I was very impressed with the bottom of our order all getting on base, some multiple times.”

Meanwhile, Kennett’s power pitchers took control, throwing in the mid- to upper-80s, and the Warriors were held scoreless from the third through seventh frames.

Valle Catholic had the bases loaded in the fourth inning; however, Heinley struck out Fallert. Schwent and Bauman were left stranded at second and first base, respectively, in the sixth.

The Warriors loaded the bases one last time in the seventh; however, Bieser flew out to Heinley, who was replaced on the bump by Kobe Gates by that time of the game.

Hoog went 2-for-3 with the Warriors’ lone run, and he walked once. Bieser was 2-for-4. Roth and Vaeth both walked and singled once.

University of Arkansas pledge Reese Robinett was 2-for-3 with two runs scored for Kennett. Bodey Ellis also scored twice for the Indians. Heinley had three RBI and Tice two.

Jayden Gegg mopped up for Fallert, who pitched an admirable game against a roster with plenty of NCAA Division I-level hitting prowess.

Heinley, one of many left-handed pitchers on Kennett’s roster, earned the win. He pitched 3-2/3 innings, allowing one earned run on five hits while striking out four and walking one.