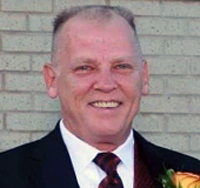 Memorials can be made to Mid America Transplant or Church of Ste. Genevieve

Don was a peace seeking man with a Servant’s Heart of Jesus. His love for any provision of God’s creation set him apart. He loved his Family and truly extended that Familial Love to his Friends. If you were his Friend, you were his Friend for Life … no matter what. And, if you were a Friend in Need, Don was your Friend ‘In Deed’. You did not even have to ask. He just had this uncanny way of showing up when you needed him the most. Loyalty was the beacon of light that illuminated the path from his heart.

Don extended this same endearment to his Fur Babies and Feathered Friends. They were truly his JOY! When it came to his pups, he would often declare “‘They rescued me’ not the other way around”. And there is much to be said about a man who takes the time to feed the birds. The birds Don fed were fat and sassy.

What made Don stand out from others was where he met you. He did not have a cookie-cutter standard that you had to measure up to in order for you to get to know him (Unless you were a Blues Fan; then you got to use the Backstage Pass Door to his heart). When Don met someone new, he met you right at your heart’s level, he opened his heart, and then waited for your reply to his invitation to become a part of his life. Those who accepted Don’s invitation have been Blessed Beyond Measure just by knowing him.

Don touched everyone by his humble and selfless gift of himself. The title he earned as Organ Donor portrays his final Noble Gift of Honor in his Legacy of Love. Spice that with his Sense of Humor (some of his last words of advice were “Never iron a four-leaf clover because you don’t want to press your luck”), his Exceptional Creativity (his Pandemic Christmas Tree was a classic example), his Extensive Love for Music, and (most importantly) the Remarkable Love he had for his Lord and Savior … and you have Don “Corky” Dresner; The Man; The Myth; The Legend; The Great One (T.G.O.) … He made our lives Terrrrrrific! “Have a GOD Day!” and then “You have a Better One!”