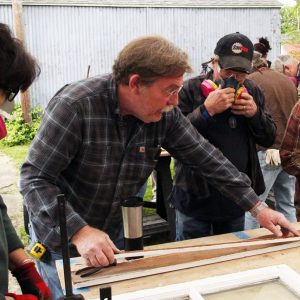 Sponsored by the Ste. Genevieve Heritage Commission, the Friday  workshop was a classroom session. On Saturday, participants enjoyed a hands-on workshop on repairing wood windows.

They replaced a window in a historic home owned by Jack Donze at Second and Market streets. The window was replaced on the second floor of the circa 1890 I-house portion that fronts on Second Street. It connects with the circa 1818 Jean Baptise Bossier House, which fronts on Market. (Dorothy Hailey and Brad Moore have opened Quintessential Rivertown Spice & Tea downstairs and live upstairs.)

Sunday’s session was also be a hands-on workshop on repairing wooden siding.

During the day-long window workshop, Yapp removed the window and its two sash weights and showed the participants how to completely redo the window under a tent in the back yard

He then showed them how to rehang the sash weights with new rope and then reinstalled the window.

During the work, he told the participants how he had hosted a PBS home repair show that executives thought could surpass Bob Villa’s famed show, This Old House. According to Yapp, that all fell through when he refused to cave in to pressure by PBS executives and advertising sponsors to encourage replacing historic materials with new products, rather than focusing on saving and repairing historic components of houses.

Since the show was cancelled, he has started his own Youtube channel and travels the country, sharing his knowledge in workshops like this one, he said.