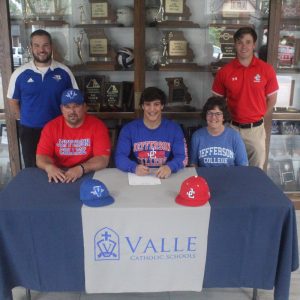 The Vikings are currently 20-22 this season, but they won 16 of those games in the region and 14 in the conference.

Gegg had a signing ceremony in the Valle Schools lobby, with teammates, family and Jefferson College assistant coach Harry Markotay all present.

“The winning tradition (at Jefferson), and their ability to develop players and get them to the next level really stood out to me,” Gegg said. “They have a really good coaching staff. During my visit, I could tell right away that this is the place I wanted to be.”

Gegg, who can both pitch and play a position, most likely will be a corner outfielder on the junior college level.

“Jayden is a self-made player,” Valle Catholic head coach Nathan Gegg said. “He’s worked hard to improve. He has plus attributes, in speed and strength.”

Gegg’s athleticism has helped him become a force in the Valle Catholic batting order.

Coach Gegg said Jayden’s batters’ eye is another strength, having walked 31 times in 29 games this season. He also has 17 doubles, five triples and 13 stolen bases.

Should Jayden pitch in college, he’ll rely on a fastball that’s clocked in the low to mid-80s.

In addition to Valle Catholic, Gegg also has experience playing for the Ste. Genevieve American Legion Post No. 150 squad.

“It’s been a dream of mine ever since I was a little kid to play baseball at the college level,” Jayden Gegg said. “For about a year and half now, I have been working really hard in the weight room, and focusing on getting bigger and stronger. When I got offered, it was an amazing feeling.”

Gegg said he plans on majoring in accounting at Jefferson College, which has a stout curriculum in that field.

Jayden Gegg is the son of Joe and Kelly Gegg, and he was one of 35 Valle Catholic graduates to receive a diploma last Thursday.