The Dragons upended Valle Catholic, 4-1, at Yanks Field on May 6 — en route to a second-place tournament finish.

Farmington downed Ste. Genevieve 9-1 in the title contest, while Valle Catholic bounced back for third spot in a 9-3 conquest over Park Hills Central.

“At this point in the season, we know what we have to do in order to compete in our district,” McDaniel said. “It’s comprised mainly of MAAA teams, so there aren’t any surprises about who you might face. It all boils down to who executes the best that particular day.”

Coach Gegg said the keys to winning at the district tournament are getting quality at-bats and making sure his team doesn’t come out flat — which has been a problem in recent games.

On Monday, No. 1 seed Valle Catholic squared off with No. 5 Herculaneum, a 10-8 winner of Potosi this past Friday. Meanwhile, No. 3 Ste. Genevieve and second-seeded Park Hills Central played each other in the other semifinal. 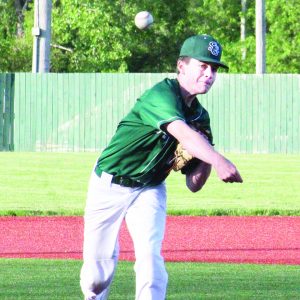 The championship game, weather permitting, was set for Tuesday evening at Yanks Field.

In the victory over Valle Catholic, Quentin Wittkopf and Hunter Lorance fueled the Dragons.

Wittkopf pitched a complete-game four-hitter, allowing just one earned run and one walk while striking out five. Lorance smacked a two-run home run in the fourth inning, which set off a green-clad mob scene at home plate.

Aiden Boyer and Zach Boyer also helped the Dragons with each batter doubling.

Valle Catholic won both of its games last week, topping Cape Central 7-5 and following that with a 16-1 laugher over North County. Ste. Genevieve split games, beating St. Pius 5-3 on Senior Night while losing on the road to Cape Central, 3-2.

Nathan Selby was the winning pitcher for the Dragons over St. Pius, going the distance. He allowed three earned runs on seven hits with two walks and one strikeout.

“It was great to see our seniors get a victory in their last regular-season game at Yanks,” McDaniel noted, “especially with Nathan throwing a complete game for us.”

Adrien DeRousse pushed across two runs and had one RBI while teammate Payton Matthews went 2-for-4 with one run scored.