The Warrior spirit emerged through the raindrops yet again — and both the boys’ and girls’ squads claimed team titles.

But, as head coach Samer Zoughaib noted — winning the sectional meet as a team was never truly the focus.

“The focus was to get out and finish in the top-four (of events),” Zoughaib said. “We did all we could to qualify as many athletes as possible. We got a lot of events though, the boys qualified in 15 out of 19 and the girls made it out in 10 of 19.” 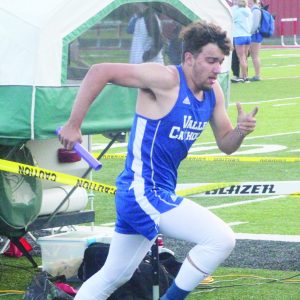 Zoughaib said the boys could potentially finish in the top four as a team at state, with “serious” competition from Green City, Mound City, King City and Princeton.

The girls’ goal is to place among the top-10 teams at state.

The meet will begin at 9:30 a.m. Saturday, with opening ceremonies followed by pole vault check-in and the 3,200-meter runs.

Zoughaib had more to say about the weather.

“The weather was a problem, because it rained at our sectional, and not at other places,” the coach commented. “Some of the numbers coming in from other sectionals were faster than ours. That is a big deal since we are all fighting for good lanes at the state meet.”

Regardless, Valle Catholic’s boys won sectional by 71 points over Vienna, 170-99, while the girls were 24 points clear of a strong contingent from Delta, 111-87.

Mitchel Meyer, who will be joining Stoll at Mineral Area College next year, was the 400 dash champion — clocking in at 54.65. Teammate Braden Coleman fell short of advancing to state, taking fifth

The Warriors continued their dominance in the 4×400 relay as McClure, Coleman, Hoog and Meyer clocked in at 3:40.16, five seconds ahead of Calvary Lutheran. The 4×800 relay (Coleman, Hoog, Roth and Flieg) placed second in 8:44.14.

In the field events, Joseph Flieg was second in the pole vault with a springboard of 10-feet, 4-inches. Stoll was second in the long jump (20-8 1/2), Meyer claimed gold in the triple jump (40-2 1/4). None of the Warriors’ throwers advanced.

Valle Catholic advanced to state in the 4×200 relay, with the foursome of Loida, Rachel Valle, Hailey Weibrecht and anchor leg Ashlyn Klump clocking in at 1:53.19 to win it.

Katie Kertz joined Loida, Weibrecht and Rachel Valle to garner the 4×400 relay in 4:26.99, 12 seconds faster than Community High. The 4×800 relay also was victorious as the quartet of Rachel Valle, Basler, Kertz and Nicole Valle clocked in at 11:07.73.

Kertz also qualified for state in the pole vault, with a springboard of 6-feet even.

Ella Bertram earned a silver medal in the shot put with a mark of 34-7 3/4 and teammate Brianna Hibbetts was fourth in the discus (81-10) — rounding out those advancing to state.