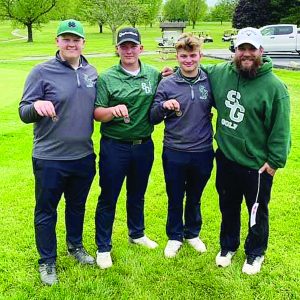 Qualifying for state has a simple criteria, a golfer must place within the top-18 at the district level.

Luke Basler, Bryce Barley and Grant Weiler did just that, and all three golfers have qualified for state for the first time ever.

The Class 3 state tournament location is a familiar place for the Dragons’ golfers: Crown Pointe Golf Club and Resort in Farmington. Ste. Genevieve played Crown Point a handful of times during the 2021 season.

The state tournament takes place over the course of two days, concluding this past Tuesday.

Basler paced all Dragon golfers with an eighth-place finish, firing an 85 at the Class 3 District meet, which took place at St. Francois Country Club.

Basler would have scored even higher had he not double bogeyed on his final hole. He managed several pars and showed consistency throughout his round.

Barley played well, save for one shot that careened into the water on Hole No. 7, but he bounced back from that for a 91. Mueller said Barley’s mental approach was key in qualifying for state.

Weiler also showed a cool demeanor, according to his coach, fighting for every stroke — and he qualified for state by one shot.

On the downside, Landon Rose recorded a 96, finishing out of the running for a state berth. Driving was a problem for Rose, Mueller reported. Rose was able to save some strokes with solid chipping.

Kellen Hogenmiller rounded out the scores for the Dragons with a 105. Hogenmiller’s downfall was his chipping, Mueller said. However, Kellen excelled on tee shots with his driver.

Cape Notre Dame was able to fend off Dexter by one stroke for the team title, 356-357, and the Dragons were third in this 15-team field with a 367. Dexter’s Ryan Collier was the overall medalist, carding a six-over par 78.

Last week, the Ste. Genevieve Herald learned both Rose and Barley will continue their golf careers at Mineral Area College in Park Hills. Look for a complete story on that in a future edition of the Herald.