On April 29, the Ste. Genevieve softball team produced some teary eyes with a wonderful gesture toward in-town rival Valle Catholic. 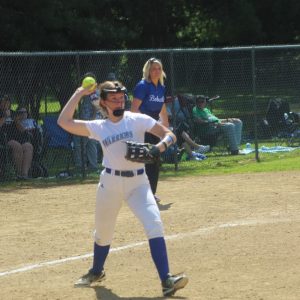 “Macy and Lexi were both four-year players for me,” said Valle Catholic head coach Kurt Basler. “They were both very important pieces to the program. They both put in a lot of time, and improved year after year.”

Basler said the 2021 season will go down as a success, especially noting the Warriors finished with nine wins and earned a run-rule victory over Leopold during the Class 1 playoffs.

“We got better every day as a team,” the coach commented. “Each player worked hard to be a better player, and improve their skills.”

Eventually, Oran thumped Delta in the Class 1 District 2 Tournament, 10-3. However, Holcomb dispatched the Eagles 14-6 in the state quarterfinals.

Meanwhile in Class 3, Ste. Genevieve gave Potosi all it could handle during the Class 2 District 3 tournament at the Trojan Recreational Complex.

The Dragons pushed the Trojans until Potosi scored three runs in the bottom of the fifth en route to a 5-3 victory. Potosi then downed Park Hills Central, 6-2, for the district championship.

Potosi remains alive for the state title after topping Forsyth, 4-1, in the quarterfinals on May 13. The Trojans will play Diamond at 4 p.m. Friday in the state semifinals, with the game set for the Killian Softball Complex in Springfield. 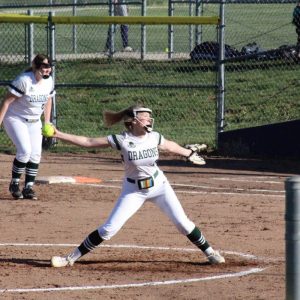 Ste. Genevieve head softball coach Russell Toombs thanked the seniors for their contributions to the Dragon program — which included this year’s school-record 16 wins.

“The seniors have done a tremendous leadership job this entire year,” Toombs said in an email to the Herald on May 5. “We will miss their leadership and abilities.”

Kreitler will leave Ste. Genevieve as one of the most decorated multiple-sport athletes in school history, including a record for doubles in a season (17) and a long list of accomplishments in volleyball.

Schwent manned down the catcher spot. Watts was mainly a third baseman. Autumn Basler was one of Toombs’ go-to pitchers, and she played first base. Johns was a role player, spending most of her time as an outfielder, and she was the vocal chatterbox in the dugout, as Toombs noted.

In the loss to Potosi, Ste. Genevieve had the lead twice thanks to Izzy Basler’s base running and Schwent’s hitting, taking a 2-1 edge into the bottom of the fifth — when Potosi produced three runs.

Autumn Basler also had one of her most effective pitching performances of the season, throwing 4-2/3 innings. She surrendered four runs (one earned) on five hits with five strikeouts and two walks. Faith Lincoln also pitched for the Dragons.

“Our season success was predicated on the team giving everything they have every game, and I do believe they did this,” Toombs said.

In Valle Catholic’s loss to Delta at Oran on May 7, Ade Weiler doubled and scored in the first inning as the Warriors took a fleeting lead. Delta forged ahead with five runs in the third.

Both Belle Fallert and Mia Weiler were hit by pitches and scored in the fifth inning.

Macy Wolk was tagged out at third base attempting to stretch a double into a triple, and the game ended on account of the mercy rule.