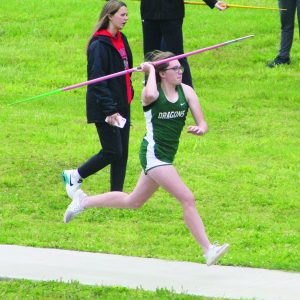 The Ste. Genevieve High School boys’ and girls’ track and field teams served as Class 3 District 1 host this past Saturday at Dragon Field.

The Dragons took advantage, with the girls placing third overall and the boys were fifth in their gender.

Senior Megan Aubuchon was a given — setting yet another school record, this time in the 100-meter hurdles — and junior Etta Heller was a surprise, serving as the major storylines for Ste. Genevieve’s girls.

The girls finished with 115 points, which was 15 points behind Herculaneum and Mineral Area Activities Association rival Potosi. Both the Blackcats and Trojans shared the team title.

“Megan continues to amaze me,” said Ste. Genevieve head girls’ coach Tyne Huck. “All of the seniors are stepping up as needed, which is nice to see.”

Unexpectedly, the Ste. Genevieve boys’ 4×200-meter relay qualified for sectionals as the foursome of Ashton Irwin, Justin Schwent. Austin McBride and Ethan Ogden clocked in with a fourth-place time of 1:41.42.

“I wasn’t surprised to see the boys score 84 points at the district meet,” said head boys’ coach Corey Samples. “They worked hard all season, and they were due for some good performances. Everyone competed well.”

The Class 3 Section 1 meet is set for this Saturday at Central High School’s Rebel Stadium in Park Hills.

Here’s a complete rundown of the Dragons’ sectional-qualifying success.

Aubuchon placed third in the high jump with a leap of 1.47 meters (Missouri Mile Split’s website didn’t have Standard measurements from this meet).

Marysa Flieg earned gold in the girls’ javelin with a mark of 39.08, while Heller was third with a career-best mark of 29.12.

Heller claimed gold in the shot put with a mark of 11.02m while Jamison Kemper also advanced to sectionals (fourth, shot put, 9.75m).

“We’re moving on to sectionals in every throwing event,” said Huck, beaming with pride. “We had some huge finishes.”

Aubuchon passed a runner from Kelly to take first place in the 4×400 as the Dragon foursome seized gold in a time of 4:19.89. The foursome also featured senior Jaden Wehner, Flieg and Reynolds.

Ste. Genevieve’s traditional 4×800 relay also ran the 4×400 relay later in the day, advancing to sectionals in both.

Also in the distance runs, cross country standout Mason Gegg qualified for sectionals with a fourth-place finish in the 3,200 (10:33.89).

In the field, Austin McBride moved on to sectionals in discus with a toss of 39.67m, and he nearly made it in the pole vault, too. He was fifth in that event with a mark of 3.35m.