It was almost as if 2020 had never happened. 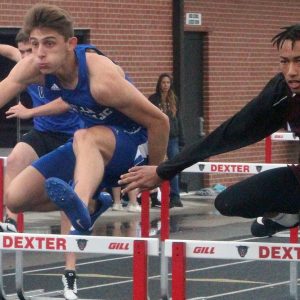 For the girls, Valle dominated the relay events and Katie Kertz won the pole vault.

The Warriors also dominated in the distance events.

For the girls,  the 4×200 relay team of Sam Loida, Rachel Valle, Hailey Weibrecht and Ashlyn Klump took first place with a 1:55.41 time.

The top four in each event move on to sectional action against the top four placers in Class 1, District 2. The top four there will advance to the state meet.

“District is a qualifying round, so we ran just to get them out,” said longtime coach Samer Zoughaib. “Now we have to run at sectionals, regardless of the competition. We have to put ourselves in the best position to compete at state.”

Having good results at sectionals takes on an even higher importance this year, thanks to changes at the state meet.

“The state meet is no longer has preliminary rounds, so what we run at sectionals determines if we end up in the fast or slow heat,” Zoughaib said.