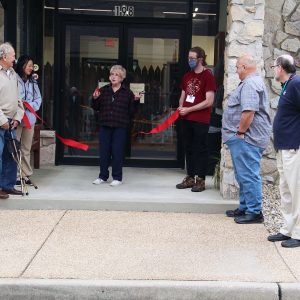 Margaret A. Carr, who has long fought to raise awareness of the 1780 Battle of fort San Carlos, cuts the ribbon, officially opening the Centre For French Colonial Life’s exhibit on the battle and the Ste. Genevieve militia’s role in it. At far right are Mayor Paul Hassler and Geoff Giglierano, executive director of French Colonial America, both of whom spoke during the festivities Saturday. (Photo by MARK EVANS/Herald staff)