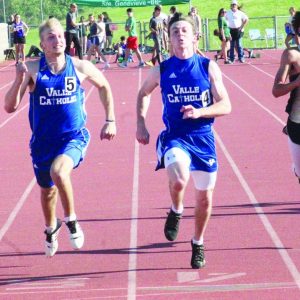 Two distinct cheers took place after completion of the boys’ 1,600-meter relay on a warm Friday evening at Dragon Field.

Valle Catholic celebrated winning the relay over Farmington with a stout time of 3 minutes, 33.90 seconds — with less than three seconds separating the squads.

Still, the Class 1 Warriors showed they could complete with a school from a much larger enrollment size in Farmington.

“The MAAA conference meet was a fun one,” Valle Catholic track and field coach Samer Zoughaib. “I knew going in it was going to be close. Both the boys and girls had an awesome day.”

Valle Catholic will now practice this week in preparation for the Class 1 District 1 meet set for Dexter High School this Saturday. The meet begins at 11 a.m.

“This meet prepared us for districts, as we are about to start the qualifying rounds,” Zoughaib noted. “From this point forward, the top four move on to sectionals.”

Farmington scored 152.5 points, which was 9.5 more than Valle Catholic on the boys’ side. The Warrior girls placed fourth with 86.83 points, about 19 behind in-town rival Ste. Genevieve.

Valle Catholic’s boys fared well both on the track — and in the field — with Bryce Giesler coming through in the javelin with a mark of 44.62 meters to claim the gold medal. He also earned fifth in the long jump (5.59m).

Two of the most impressive sprinters this season have been Valle Catholic’s Cory Stoll and Luke McClure.

The two boys teamed up on the 400-meter relay with Sam Drury and Giesler, clocking in at 44.72, which was two one-hundredths of a second off school-record time. Stoll also was second in the long jump (6.29m).

Other boys helped the Warriors pile on the points.

Like the boys, the Valle girls’ 3,200-meter relay also claimed a bronze medal with a group of Rachel Valle, Camryn Basler, Katie Kertz and Nicole Valle clocking in at 10:36.25.

Weibrecht was the silver standard in the triple jump (9.48m) and fourth in the girls’ long jump (4.44m).