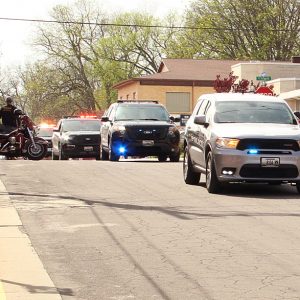 “He’s getting a little bit better every day,” police chief Eric Bennett said last Friday. “It’s going to take quite a  while for him to get back to normal, but he says he’s adjusting to life  at home. It’s just taking it day by day.”

Bennett said the family has been overwhelmed by the support he has gotten.

Unverferth was brought from a St. Louis hospital to his Perry County home, with a parade of emergency vehicles, including Ste. Genevieve Police, Ste. Genevieve County Sheriff’s Department and the Missouri Highway Patrol, circling through downtown Ste. Genevieve on its way.

A giant “Get Well” card has been at Ste. Genevieve City Hall, where numerous people have signed it.

A bank account has been set up at First State Community Bank, called “In Benefit of Officer Pete Unverferth,” to collect funds for him.

Meanwhile, yard signs have been sold to show support and various benefits have been put on, including a barbecue. There has also been a trivia contest scheduled in Cape Girardeau County. Plus, a five-stop Bingo run on Highway 61 will be held June 12, sponsored by the Ste. Genevieve Jaycees, Jennifer Schmidt and Bobbi Basler.

“He and his wife are both just blown away by all the support that they’ve gotten, and all the prayers,” Bennett said. “They just ask for continued prayers for his healing.”

The local schools have helped, R-II students raising “a tremendous amount of money” in Bennett’s words to go to the family, while Valle Catholic students offered to do yard work and other jobs around the Unverferth home.

“We’ve gotten calls from law enforcement agencies all over the country, sending well wishes and offering support, offering an ear,” he said. “Officers who have been through similar incidents and have gotten burned on duty, reaching out and extending their services if he wants those.”

Although the financial assistance is important, Bennett said that the Unverferths have found the outpouring of support itself even bigger.