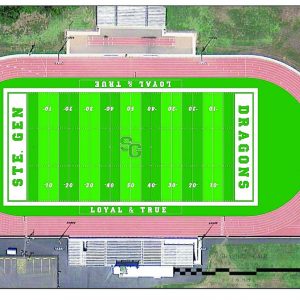 Both the Ste. Genevieve and Valle Catholic High School football teams will be playing on new surfaces this coming fall.

And, coincidentally, the Dragons first guest will be the Warriors — as the teams clash in the “Old Settlement Showdown” on Friday, Sept. 3.

“The 2021 edition of the crosstown rivalry will be the first official contest on the new field,” said incoming Ste. Genevieve head coach Jay Pope, “which adds another layer of making that game special.”

Pope and the entire Dragon coaching staff is excited about the updates. In fact, the coaching staff played a role in the field design process, Pope mentioned.

Naeger mentioned the volunteers who have helped maintain Fr. Dempsey Field throughout the generations.

“For many years, we lined the field with chalk and lime, and this has raised the yard lines several inches, and made it tough to mow,” Naeger said, “and recently made it a potential hazard for playing.”

Naeger said the new grass will drain much better, and also handle the elements — including Missouri’s icy months, strong winds and whatever else Mother Nature decides to bring.

The coach said playing many home postseason games also contributed to the wear and tear of the field.

Naeger thanked the Ste. Genevieve R-II School District for allowing Valle Catholic the use of Dragon Field’s facility throughout the years.

He also gave bouquets of compliments to all the volunteers.

“Our volunteers are the lifeblood of our school and athletic programs,” Naeger said. “We have a tremendous force, led by Bill Lurk and the athletic club. We look forward to honoring all of those who have helped this project come to fruition with their time, talent and treasure.”

“This is long overdue,” Lurk said. “A lot of alumni have come forward to make this happen.”

The field already has underground water sprinklers. However, there will be a new drainage system, with pipes already on the field for placement. The field itself will be regraded, too, Lurk said.

The new playing surface will feature Bermuda grass, which also is popular at local golf courses such as Ste. Genevieve Golf Club.

Construction already has begun, with the goal of completing the project in time for the first tentatively scheduled home football game versus St. Francis Borgia on Sept. 24. The Warriors’ first four games of the 2021 season are on the road.

Nick Fallert and Lurk said there is an extensive list of more than 30 donors with the project already. More donors are expected to come forward throughout the summer, and the Ste. Genevieve Herald will mention them when construction has been finished.

Although it will be odd, the new 400-meter track will run behind the visitor’s side bleachers, which will be sufficient enough for small regular-season meets.

Lurk said Dempsey Field has not faced any sort of renovation since the 1980s.

Dragon Field also is gearing up for a massive overhaul. The new track and field surfaces will come with a price tag of $595,371 — minus a three-percent package discount.

Herald editor Mark Evans and school officials reported there had been at least $465,000 set aside for these improvements since 2007, the year when the first artificial turf surface was installed.

“The football team, community sports teams and physical education classes have used the field a lot since 2007,” Nix noted.

When it was a grass field, only the Dragon varsity football team used it — for Thursday practices and games on Fridays.

The project has an expected completion date of July 1, Nix said, with the St. Louis-based Byrne & Jones the main contractor of note.

Byrne & Jones has more than 45 years of experience in turf installation and maintenance, concrete and asphalt paving, with an array of completed projects available on its website: www.byrneandjones.com.

Nix said the track will remain the customary “burnt red” color, however the field itself will be tricked out.

“We are using a two-toned green on the field,” Nix said. “I think that will add some character to it. The end zones will be painted white, with “Ste. Gen” on one side and “Dragons” the other.

There will be the ever familiar “SG” logo at the 50-yard line, and the coaches’ boxes on both sides will have the words “Loyal and True.”

Nix said the field will be a 60/40 mix of rubber and sand, a type of turf that’s called “Momentum Pro.” The new surface has a life expectancy of 12-15 years.

A purchasing cooperative is made up of various members within similar industries, with recommendations made through a competitive proposal process.

The track was originally scheduled for resurfacing last year; however, the COVID-19 (coronavirus) pandemic caused delay in the project, school officials reported.

“Through the outstanding care of our coaches and maintenance staff, we have been able to get almost four additional years of it,” Dr. Julie Flieg said of the current track, which her daughter, Marysa, shines on.

The rest of the money for the project ($130,371) will come from what’s called local sources, Dr. Flieg added.

And in the end, both Valle Catholic and Ste. Genevieve will have new “turf” to defend.