Two years worth of honors were handed out April 23 at the 97th Annual Ste. Genevieve Chamber of Commerce Gala at the DuBourg Centre.

For 2020, the Small Business of the Year Award went to the former Loida Ag Service.

Russ and Tom Loida accepted the award and both made brief remarks.

“We appreciate the chamber recognizing us,” Russ Loida said. He noted that the demands of the business and family farming have kept them from being especially active in the chamber over the years. “We’re very grateful.”

“We’re so grateful for our parents, grandparents, aunts and uncles that laid the groundwork for us,” he added. “We wouldn’t be here today if it weren’t for their efforts and their grit and determination.”

Tom Loida added that they feel “very blessed to be part of the community.” He also thanked family members for the sacrifices they made over the years. 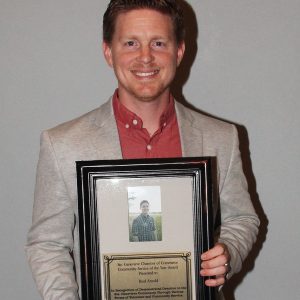 Arnold, who has been executive director of the community center since 2008, was born and raised in Ste. Genevieve. He graduated from Ste. Genevieve High School in 2003 after leading the Ste. Genevieve Dragons to an 11-2 record as a senior and earning all-state honors as a quarterback.

“Thank you to the Chamber of Commerce for this award and for all the hard work you do for the community,” Arnold said. “I have been coming to this banquet for several years and I feel honored to be included as an award recipient with the great people that have come before me. Special thanks to my parents and my wife and family for all the support and encouragement you have given me throughout the years, without you I would not be where I am today. I love you guys.

“It seems strange to win a Community Service Award for doing my job, but to me it’s more than a ‘job.’ The Community Center and all that has come with it over the years has evolved into such an important piece in my life. I thoroughly enjoy it and love what it has become for the community.”

“We have been able to do some incredible things thanks to our staff and board of directors and all the support we have received over the years and hope to continue to do so far into the future,” Arnold said. “We have such a blessed community and it is an honor to be a part of it and thank you.” 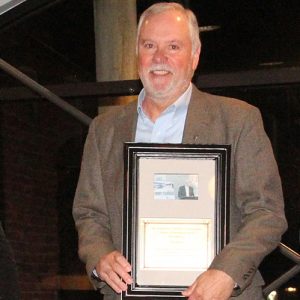 Keim was CEO at SGCMH from 2007 until his retirement in 2020, drew one of the biggest rounds of applause of the night.

Kreitler listed the numerous additions and improvements to the facilities and the hospital’s offerings to the community under Keim’s leadership. Among these was the 2012 opening of the Bloomsdale Medical Center.

She noted that Keim has also been heavily involved in the community, serving as chamber president in 2015, among many other activities.

Keim quoted baseball Hall of Famer Lou Gehrig’s famous 1939 speech, in which he said he considered himself “the luckiest man on the face of the earth,” despite having been diagnosed with amyotrophic lateral sclerosis, the disease that would bear his name.

“I have been so blessed to work with the best people in health care,” Keim said. “I have the best board of directors ever to work with, and our physician community is second to none. I love everyone of our physicians. They bring such passion to health care, as well as the people at the hospital,

“As a community, we are so blessed to have the health care system that we have, and it’s because of these people.”

He also praised his family for their support and had kind words for the community.

“I always said Ste. Genevieve is such a wonderful place to be and live,” he said. “That’s because of the people.”

The Community Service Award for 2021 went to an individual who wished to remain anonymous.

“This individual is a prime example of being the change in the world that we want and we see,” Kreitler said. “So much so that this individual has asked to remain completely anonymous.”

“Working selflessly and tirelessly, this individual helped tremendously bring acts of service and kindness to keep health care workers and so many others in this community safe.”

She added that the community is “truly blessed” to have people like this individual in the community and asked everyone to “pay it forward” with acts of kindness to others.

For 2021, Small Business of the Year went to the Dew Drop in Bloomsdale.

R.J. and Eric Clements and Cara Clements Naeger bought the  operation in March 2015, and completely redid the building, a landmark since the 1920s. They opened that September.

The Kozy is now under the same roof.

Kreitler noted that the siblings had an interest in historic preservation and a construction background.

“They found a way to recreate a local watering hole and found a way to merge two concepts together where people can enjoy two different atmosphere,” Kreitler said. “This family has all brought something different to the table.”

Kreitler called the expansive plans “a leap of faith” on the family’s part, including  outdoor space.

Things were going great as 2020 opened. The pandemic, however, saw a 95% drop in sales and led to some out-of-the-box thinking and quickly set up a new online “to go” ordering, service, including drivers and special packaging for food.

They were also able to keep all of their 60 full-time employees working, despite the challenging year.

“It was a leap of faith that you guys would come,” she said.

The 2021 Lifetime Achievement Award to Rita Brumfield, director of nursing at SGCMH since 2001.

Kreitler said that Brumfield had been so passionate about Ste. Genevieve getting a hospital in the 1960s that she won first place in an essay contest on that subject as a high school student. She then started at the newly-opened hospital as a candy-striper. She began her nursing career in 1966. 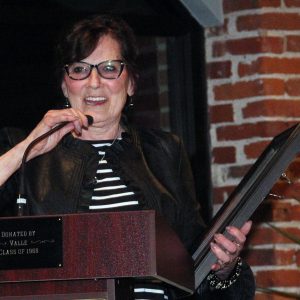 “We have been extremely fortunate to have such an experienced and polished individual as part of our community and part of our hospital family,” Kreitler said.

“I am very grateful to the chamber for this honor,” Brumfield said. “I feel very honored. I’m also very thankful to the good Lord above for giving me the wherewith all to do what all I’ve done.”

She also thanked her family and her “hospital family” for their support.

“I appreciate everything you’ve done for me,” she said.”

He compared it to the 2003 Louisiana State football team,which won the national championship despite a big mid-season loss.

He quoted the biography of the head coach, Les Miles: “One thing about championship teams is that they are resilient. No matter what is thrown at them, no matter how deep the hole, they find a way to bounce back and overcome adversity.”

He said there are “a lot of similarities” between that 2003 team and the 2020-21 health department, in which longtime administrator Sandra Bell retired, replaced by interim directors Julie Flieg and Jeanette Wood and finally by Jennifer Mueller.

He also complimented the department  for having “looked adversary in the eye and made tough decisions,” as the county went into and out of COVID-19 lockdown ad addressed vaccine distribution, without slacking on any of their other essential services.

Mueller accepted the award, although she noted that “It seemed kind of silly for getting an award  for just going to work and doing your job.”

“Thankfully we have great

people working there and a great board,” she said. “As far as vaccination clinics, we can’t take credit for that. It was a complete team effort between the hospital, the community center, the sheriff’s department and the ambulance district and all the volunteers.

In addition to the usual awards, chamber executive director Dena Kreitler was surprised with a special award for her 20 years of work in leading the chamber.

Blum praised Kreitler for having “so much passion for her position,” and called her a  “truly amazing, one-woman operation that keeps everything running from this event this evening, to the Summer Concert Series, Leadership, ball tournaments, recently the license office, and all the day-to-day operations in between.”

He also called her “the engine that keeps the train moving.”