The Ste. Genevieve High School baseball team accomplished something not too many others have this season against state-ranked Valle Catholic.

This “Old Settlement Showdown” game was originally scheduled for Alumni Field in Valle Springs; however, field conditions prompted the move to Yanks. The Warriors were the officially the “home” team.

“Ste. Genevieve is a quality baseball team, and they made some outstanding defensive plays in our game,” Valle Catholic head coach Nathan Gegg said. “They made plays when they needed to, and made big pitches in big spots. They made us work for all seven innings.”

Ste. Genevieve head coach Michael McDaniel had his spin on the game. 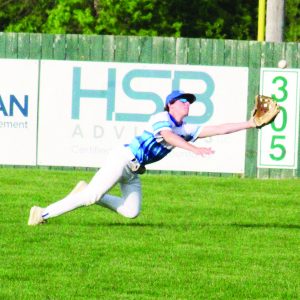 “Any time the two schools get together, records and everything else prior to that game can be thrown out the window,” McDaniel said. “Both teams have a lot of good ball players. Knowing they’re going against guys they’ve grown up with helps bring a different perspective and significance to the game.”

Valle Catholic and Ste. Genevieve also could face each other in the postseason since the Missouri State High School Activities Association placed both in the same Class 4 level district.

“Their guys put in a lot of time to make themselves a quality team,” McDaniel added, remaking Gegg always has the Warriors in a position to be successful.

Valle Catholic is currently one of the hottest teams in the state, winning 18 straight games for a 22-3 record. Meanwhile, Ste. Genevieve has fallen to 8-13.

Jayden Gegg celebrated his signing with Jefferson College, which also took place last Thursday, with a run-scoring double, two walks and a run scored — and he also was the winning pitcher of record.

The Dragon pitching trio of Nathan Selby, Quentin Wittkopf and Aiden Boyer allowed seven runs (all earned) on nine hits. Ste. Genevieve’s hurlers combined for six walks, which was a factor in the game.

Valle Catholic did most of its damage during a six-run third inning, highlighted by an Austin Burnett dinger over the fence in right center field.

Ste. Genevieve outfielder Chaytin Lea lost his cap while trying to chase down the ball as it sailed over his head.

Carter Hoog, Collin Vaeth and Gegg also sprayed hits during the scoring barrage. Drew Bauman, who reached base on a walk, scored on Vaeth’s single. Nathan Schwent plated a run on a Chase Fallert fielder’s choice.

Payton Matthews, Hunter Lorance and Aiden Boyer were the only Dragons to record hits. Carter Klump, Adrien DeRousse, Matthews and Boyer all walked, but Ste. Genevieve stranded runners at third on a couple of occasions.

Burnett went 3-for-4 with two hits and two RBI. Josh Bieser was 2-for-4 with one RBI in the fourth inning.

Last weekend, both Valle Catholic and Ste. Genevieve were in action across the Show-Me State.

Valle Catholic defeated Kelly, 7-4, to win the Neelyville championship thanks in part to stellar defense from right fielder Isaac Roth and four extra-base hits. Chase Fallert also went 6-1/3 innings with seven strikeouts and just one earned run while helping his own cause by scoring twice.