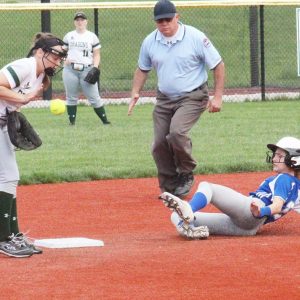 The Ste. Genevieve and Valle Catholic softball programs wound up playing each other a whopping four times during the 2021 season.

For the second time this year, the Dragons topped the Warriors by three runs — this time, 6-3, at Leon’s Field on Thursday afternoon.

This marked Senior Day, with both Ste. Genevieve and Valle Catholic seniors walking to the middle of the infield for special recognition.

“We played well against Ste. Genevieve, but we just couldn’t get any key hits (when we needed them),” Valle Catholic head coach Kurt Basler said.

Ste. Genevieve head coach Russell Toombs acknowledged that this was a competitive game.

“Coach Basler does a great job in preparing his girls, and having them ready to play,” Toombs said. “Any game in almost any sport will be competitive when Ste. Genevieve plays Valle Catholic. His girls pitched and fielded well.”

Toombs went on to give his senior group plaudits, especially since it was this bunch who helped with Ste. Genevieve’s transition from a fall to spring program.

“All of these seniors have made a tremendous mark on the program,” Toombs said. “They have worked hard to make Ste. Genevieve a strong program.”

Kreitler also established a new school record in doubles with 17, hitting another one versus Valle. The future Mineral Area College player has also served as a spot pitcher. Schwent has served as battery mate for Basler. Watts has played primarily at third base, while Johns has been used as an outfielder.

Fittingly on Friday in the Warriors wild 17-16 eight-inning conquest of Oak Ridge, both Shuh and Van Elzen tripled to help the team triumph.

In the game between Ste. Genevieve and Valle Catholic, the Dragons jumped up 1-0 as Chloe Walker scored on a Basler fly out in foul territory.

Kreitler doubled and Autumn Basler singled in the bottom of the third, putting the Dragons ahead again, 3-2. Morgan Schwent began the rally with a double, and courtesy runner Brynna Wehner scored on the Kreitler extra-base hit.

McKenna Bauman doubled and scored on a passed ball while Shuh was at bat in the fourth, leveling the score at 3-all.

Izzy Basler eventually scored the go-ahead run in the fifth on a Kreitler RBI groundout. The Dragons tacked on two more runs in the sixth while keeping Valle scoreless.

Both Kreitler and Basler finished with two RBIs. Basler earned the win, striking out 11 while walking three in a complete-game, seven-inning, 110-pitch performance. She allowed just two hits.

Macy Wolk, who pitched well enough to win, absorbed the loss — with the line of six runs (four earned) on seven hits with two walks and one strikeout over seven innings and 84 total pitches.

Both the Dragons and Warriors wrapped up the regular season with victories over district foes Steelville and Oak Ridge, respectively.