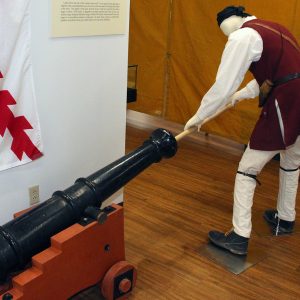 Ste. Genevieve’s only indirect involvement in the American Revolution will be celebrated at the Centre For French Colonial Life  (CFCL).

The center is opening an exhibition this weekend to bring to life the “Battle of Fort San Carlos,” sometimes called “The Battle of St. Louis,” and the Ste. Genevieve militia’s important role in it.

“Saving St. Louis:  the Ste. Genevieve Militia at the Battle of Fort San Carlos,” will open to the public this Saturday.

In 1779, Spain declared war on Great Britain, which had been preoccupied with the American colonial revolution for five years. The British looked at it as a golden opportunity to plunder the large, but somewhat weakly defended Louisiana Territory Spain controlled west of the Mississippi River.

In the spring of 1780, a force of some 1,000 to 1,200 men was put together in British Canada, consisting of a small amount of British and Canadian soldiers and a large collection of Native Americans, including Sioux, Pattawatomie, Winnebego, Sac, Fox, Chippewa and Menominee.

It began making its way down river, with the intent of taking over the Spanish outpost in St. Louis, the seat of government for Upper Louisiana.

Of course, that size group could certainly not conceal its movement.

Word was received by Captain Fernando de Leyba, lieutenant governor of Upper Louisiana, who was stationed in St. Louis, that an attacking force was on the way.

Although deathly ill, de Leyba ordered the outpost fortified, with the construction of a traditional round Spanish tower, about 30 feet tall and loaded with cannons. He also had a system of trenches dug on the sloping ground below the tower.

Meanwhile, he put out a call for militia forces to come to St. Louis’ rescue.

Among the militia captains he wrote urgent letters to was the aging Francois Valle, of Ste. Genevieve. Valle took the request/command for help very seriously. Although his health kept him from making the trip himself, sent his sons, Charles and Francois Valle II, as part of a 60-man militia force.

The group remarkably made the up-river trip in just three days, constituting 60 of the 190 reserves de Leyba called in and about 1/5 of the 300 total men who would defend St. Louis.

Many historians believe the militiamen helped dig the trenches and make other preparations as they awaited the arrival of the enemy force.

The invaders made a fateful decision to divide the force and send about 250 men to attack Cahokia, on the other side of the river. General George Rogers Clark had also received intelligence reports about the troop movement and had his post likewise secured.

The main force attacked about 1 p.m. on May 26, 1780, and was stunned to find St. Louis fortified and armed to the teeth. Nevertheless, the native warriors made a gallant attack, but could never find a weak spot in the defenses. They eventually withdrew, destroying crops and capturing any townspeople who were caught outside the fortifications.

The Cahokia attack similarly failed and Spanish Louisiana remained in Spain’s hands, playing a role in the treaty ending the American Revolution a couple of years later.

Like the St. Louis defenders prior to the attack, French Colonial America (FCA), who runs the center, had to do some massive preparation for the exhibit.

Geoff Giglierano, FCA executive director, explained that the original plan had been to have a huge display on the American Revolution itself last summer.

“Well, the pandemic comes, so we’re not going to do the big exhibit,” Giglierano said. “But we’re still open, so what are we going to do for people to see? So, we did this exhibit.”

The exhibit is a collaborative one, with items borrowed from several collections. ASL Pewter, the Ste. Genevieve Museum Learning Center and individuals such as Gary Scheel  loaned items.

“Instead of the whole American Revolution in the West, we were going to do just the Battle of Ft. San Carlos/Battle of St. Louis and Ste. Genevieve’s role in it, because that is still such a cool story,” Giglierano said. “For Ste. Genevieve, we thought this was appropriate and manageable for us.”

The presence of the Ste. Genevieve militia may have been enough to sway the outcome of the battle and keep Fort San Carlos from becoming a tragic precursor to the Alamo.

“It’s not a huge exhibit, but it’s a huge story,” Giglierano said.

The display goes into the makeup of the invading forces, looks at the competing European powers in North America at the time and shows how the battle to claim St. Louis fit within that landscape.

It also describes the battle and analyzes why it failed and what the repercussions were.

Meanwhile, plenty of interesting items are on display, including a cannon, similar to one that would have been in the rock tower, some authentic period rifles a swords and knives and a model of Fort San Carlos.

It also includes mannequins in what historians believe were the type of clothing the would have worn. Adding to the effect are photos by local photographer Ronnie Rayfield of Ste. Genevieve colonial reenactors in period costume, portraying the militiamen.

“That was very important to us,” Giglierano said. “It shows what our guys probably looked like. We couldn’t have done it without him.”

Giglierano has found that the militia members probably wore their own clothes and had to supply their own weapons.

Many people helped make the display possible and to ensure its accuracy. Among those was Bob Moore, longtime National Park Service historian at the Gateway Arch, and Jim Duncan, an author and archaeologist, who is a leading expert on the Osage tribe.

The work of historians like Carl Ekberg were important, as were contributions by local historian Bob Mueller, who Giglierano said, “answered some questions and solved some riddles” for the staff.

The exhibit will officially open at 10 a.m. this Saturday with a ceremony featuring Mayor Paul Hassler. 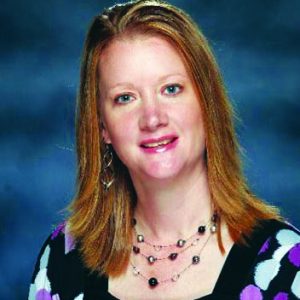