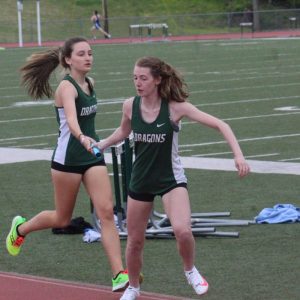 The Mineral Area Activities Association conference track and field meet is set for this Friday at Dragon Field.

Before things turn serious again, both Ste. Genevieve and Valle Catholic participated in a three-team meet at the same facility on Friday, April 23. Fredericktown also competed.

This was “serious” fun for all the athletes involved.

Ste. Genevieve head girls’ coach Tyne Huck noted this was an informal meet, and no official results were recorded.

Coaches used handheld timers and measurements on everything — but you won’t find results on a site such as Mile Split — the Bible for track and field enthusiasts.

and Gwen McKlin would run the 800 relay instead.

“In my mind, it was a chance for the kids to blow off a little steam,” Huck said. “Kids were allowed to be kids, which was a nice change.”

Ste. Genevieve’s athletes had prom on their minds, so it was refreshing to see a Friday meet end slightly after 6 p.m.

“The purpose of the open meet was to put kids in events that I thought we may have missed the chance to be in,” Valle Catholic head boys’ and girls’ coach Samer Zoughaib said.

Zoughaib said it was a glorified practice meet, with the Warriors competing in — you guessed it, the 800 relay.

“The athletes had a chance to try something different or something they may have wanted to do,” Samples said. “A lot of the athletes do the same, few events at every meet.”

The weather cooperated for the most part, too, with grey skies, cool temperatures and light winds.