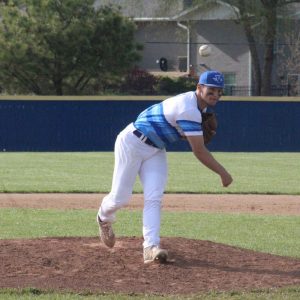 The Valle Catholic High School baseball team has been winning games in convincing fashion during its recent 12-game winning streak.

That was until West County pitcher J.D. Whitter made the Warriors earn victory as Valle Catholic trimmed West County 4-1 at Alumni Field this past Thursday.

This Mineral Area Activities Association Small School Division game turned into a classic pitcher’s duel — keeping fans on edge until the Warriors pushed across three runs in the bottom of the fifth. Pitcher Carter Hoog handled the rest.

Gegg said the Warrior batters made the necessary adjustments each time the batting order turned. And Valle scratched enough runs to support Hoog.

“Carter displayed his full complement of pitches, particularly once we took the lead,” Gegg said. “I think he had a jolt of energy, and had his best velocity of the season in the last couple of innings.”

Hoog primarily threw his fastball, and remained low in the strike zone. Carter threw an even 100 pitches, with 66 of them strikes. Any baseball mathematician can figure out that percentage. He gave up one earned run while striking out seven in this three-hitter.

Drew Bauman, Hoog’s senior teammate, was one of the few Warriors to solve Whitter.

Gegg scheduled bootheel opponent Holcomb as a replacement, winning 14-1 in a neutral-site game at Chaffee. And thrashing returned in vogue for the Warriors.