Flieg was named an “emerging superintendent” from the Missouri Association of School Administrators.

She was honored during an awards banquet at the MASA Spring Conference back on March 24. The Southeast MASA nominated her.

“I am honored to have been chosen to receive this recognition by my peers in the southeast region,” Flieg said.

“But the leadership within our district is not just held within my role,” Flieg noted. “It is truly a culmination of leadership styles and the skill sets of our administrative team, directors and board members.”

Flieg stated, though, that the true leaders in the Ste. Genevieve R-II school district are the teachers and support staff. 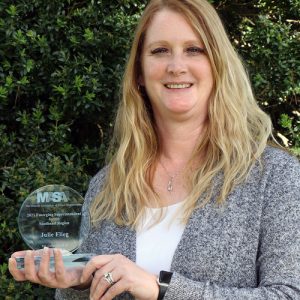 “They are in it, every day, doing what is best for our kids,” she said. “Our educations and support staff know our students. They work tirelessly to address the well-being of our students and to ensure they are a success at SG R-II and beyond.”

“Over the past few years, as a new superintendent, Dr. Flieg has proven to be a careful, thorough planner, a pragmatic problem-solver, a proponent for community partnership, and an empathetic leader,” Board of Education President David Bova, who was recently re-elected to his position, said.

In a press release prepared for the Herald, Bova complimented Flieg on her guidance through the jarring changes brought on by the COVID-19 (coronavirus) pandemic.

“She kept the students’ best interests at the forefront,” Bova said. “With her leadership as the foundation, our faculty and support staff, as well as our local community, worked together to determine the best direction for our district.”

Flieg also has continued to focus on the district’s improvement, financial planning and a vision for school facilities down the road.

Flieg, an alumna of Ste. Genevieve High School, also has spent the entirety of her educational career with the SG R-II district. At first, shewas a secretary and registrar in 1992, advancing to adult computer education teacher, middle school business instructor and assisting with special education.

She earned an associate’s degree from Jefferson College in 1992, a bachelor of science degree in education from the University of Missouri-St. Louis in 1996 and a master of education degree from UMSL three years later.

In recent years, Flieg earned a specialist degree in education administration from UMSL in 2007, and her doctorate of education from Missouri Baptist University in 2014.