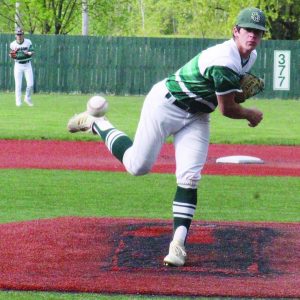 Teammate Aiden Meyer made sure he did with the only extra-base hit in this Mineral Area Activities Association Large School Division game at Yanks Field — a 4-3 conquest for the Dragons last Wednesday.

“Zach kept pounding the strike zone for a majority of the game,” Ste. Genevieve head coach Michael McDaniel said. “He was able to keep his pitches to a minimum and give us an opportunity to win.”

Adrien DeRousse, who also made a pair of nifty putouts defensively from his shortstop position, began the sixth inning with a single up the box.

Then Meyer came through with a double into the gap in left center field for what proved to be the game-winning run. It was an old-fashioned manufactured run.

“Quentin laid down a great bunt and Aiden came in the clutch with the hit to put us ahead,” McDaniel said. “We needed guys to grind, and come up big late. They did exactly what we needed them to do.”

Potosi threatened to tie — or possibly go ahead — in the seventh inning. However, the Trojans’ Blake Missey was called out for failing to tag up on a Landon Bone flyout.

McDaniel urged his players to appeal whether Missey tagged up properly or not, with the infield umpire motioning an “out” call.

Ste. Genevieve went ahead 3-0 in the bottom of the third only to see the Trojans deadlock the score at 3-all in the top of the sixth.

DeRousse was the lone Dragon to produce a multiple-hit game, going 2-for-3 with one RBI and one run scored. Aiden Boyer scored on a double steal in the third. Mason Nix and Zach Boyer also scored runs for the winners.