Members of the Ste. Genevieve County Ambulance District Board honored Rick Short, who is retiring from the ambulance staff and discussed possible future scenarios for a western county location during their monthly meeting April 12.

They met at House 3, west of Weingarten. Whether to upgrade House 3, raze it and build a new structure on the spot, or seek a more ideal parcel of land in the general area have all been options discussed during the past two or three years.

These options all continue to remain open. 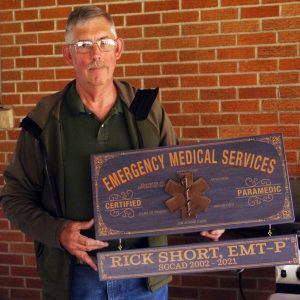 Short, who is retiring after 20 years as an EMT. For more than 10 years he has been a shift captain.

“He’s a great asset to the district,” executive director Kendall Shrum said. “We’re going to miss him very much.”

Shrum noted that Short was always “very involved” in things like the building committee and in delivering and picking up ambulances that were remounted in North Carolina, Indiana and Columbia, Missouri.

“I know he was well-respected  by the crew members and staff,” Shrum said. “He’s going to be a great loss to the district. “

Shrum also noted that if Short wants to work any as a part-time PRN employee, or return full-time, “the door is always open.”

Don Kuehn, vice chairman, presented the plaque to Short and thanked him for his “many years of faithful service.”

Shrum said that one piece of land the district had been looking at a possible location for a new House 3 was now off the market. Another individual the district has been talking to is also not ready to sell at this time, Shrum indicated.

He asked for “options, plans, ideas” from the board.

“This isn’t a bad piece of property,” board member Dennis Jokerst said.

The issues are with the building itself. One problem has been water issues in the basement, which have led to mold problems in the past.

Board member Bill Everett suggested getting price comparisons for remodeling the building, versus starting from scratch on that site, or finding a new location.

Jokerst said he would like to see a decision made by the end of 2020.

Kuehn noted that the house and property as it currently stands, “is a sellable product,” but that waiting too long to make a move could feasibly reduce its value by as much as half, if it continues deteriorating.

It was agreed that the building committee will meet the final week of April to come up with suggestions for the board.

Shrum reported that 10 new PRN employees have been hired. He said that was crucial with vacation season approaching.

He noted that the district usually hires four to five new part-time people each year. In 2020, though, none were hired, due to COVID-19.

Shrum said the 10 are being trained and that at least one of them shows definite full-time potential.

Shrum also said the Zello radio app he had mentioned the previous month was ready for use. It will allow him and employees to use their smart phones to transfer calls to ambulance radios, home phones or to phones in the three houses.

Shrum also reported that the House 1 roof had been replaced at no charge, due to a section of shingles with slightly mismatched colors.

He said Joe Bauman Construction had done “a phenomenal job,” replacing the roof in two days. This was done at the insistence of the shingles provider.

Shrum also said he wants to get price quotes on replacing the Plexiglas partition at secretary Mary Grieshaber’s desk. He said the opening is large enough that someone theoretically could reach through it and try to grab her.

Shrum said a setup similar to what the city of Ste. Genevieve installed in the front entrance to City Hall would be ideal.

He has also received one bid on updating security cameras.  The board suggested he get a second bid before proceeding.

Shrum also reported that ambulance No. 27 is in North Carolina for a remount and should be done in mid to late May.

On his suggestion, the board voted to do a tune-up and other work on of one Dodge four-wheel drive vehicle that has reached 100,000 miles and the end of its warranty.

Meanwhile, the district is continuing to see its number of calls increase.