Then seniors Austin Burnett, Jayden Gegg, Drew Bauman and Carter Hoog were honored with their parents, receiving a gift bag along with other verbal accolades. Senior manager Riley Siebert also was recognized.

“From a baseball perspective, each one of our seniors brings something to the table that allows them to be successful,” Gegg said. 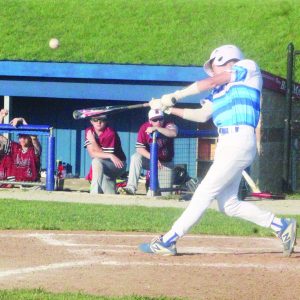 Gegg said Bauman is a heady player, with great hands on defense. Burnett provides pop in the middle of the batting order, and a calming influence on the bump. Jayden Gegg is known for his work ethic, with his work in the weight room allowing him to flourish. Hoog is the vocal leader who decided to come back and play baseball.

It also was announced during the Parents’ Day ceremony that Jayden Gegg has decided to extend his baseball playing days at Jefferson College in Hillsboro.

“All four of these guys have given a great deal to our program, and to our school,” Coach Gegg added, “in the way they conduct themselves on the field of play, and off the field in the classroom as leaders.”

Bauman went 2-for-3 with three runs scored and three RBI. Gegg walked, scored once and provided one RBI. Burnett finished with three RBI as part of a 2-for-4 hitting day, which also included a double for six total bases. Hoog also had one hit.

Additionally, Bauman pitched the first four innings versus Bismarck — allowing just four Bismarck base runners, including three by walk. Both reliever Collin Vaeth and Bauman struck out five and allowed one hit each.

The outcome of the game was hardly in doubt as Valle’s pitchers handled what turned out to be an anemic Bismarck attack.

Meanwhile, Valle Catholic scored once in the first, four times in the second and twice more in the third and fifth — never looking back. Bauman’s bases-clearing double was the highlight of the second inning. Burnett’s homer came during the fifth.

Valle Catholic baseball hasn’t lost at all in April, with 10 consecutive victories.

Gegg said if the Warriors have something they need to work on, it’s defense.

Last weekend at the Cape Showcase, which took place at select sites in the Cape Girardeau area, the Warriors beat Kelly 11-4 and Cooter 9-3.