Freemasons from Saline Lodge 226 replaced the Masonic flag and held a short ceremony on Saturday, at the Masonic monument across from the Green Tree Tavern.

The Green Tree, also known as the Nicholas Janis House and built in 1790-91, was the first meeting place of Freemasonry west of the Mississippi River. Louisiana Lodge No. 109 was chartered Nov. 14, 1807 and featured some real movers and shakers as members. Among them were Stephen F. Austin, who went on to help found Texas, William Searcy, founder of Searcy, Arkansas, Nathaniel Cook, who was with Zebulon Pike when he climbed Pike’s Peak, and Thomas Riddick, known as “Father of Missouri Public Schools.” 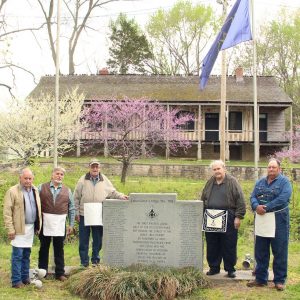 It is said that more than three-quarters of lodges west of the Mississippi can be traced back to this former lodge.

The flag is changed each year.