Ste. Genevieve County resident Paul Haug, and his son-in-law Nick Werner will be showing off an old-school fire truck this coming Saturday.

The first-ever true “Touch A Truck” event will take place beginning at 10 a.m. on Saturday in the River Rapids Waterpark parking lot.

Haug purchased the vehicle from the fire department in Gibsonburg, Ohio, which is located southeast of Toledo. 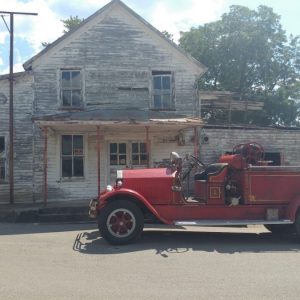 “I was a firefighter for 31 years,” Haug said. “I wanted a fire truck to play around with. I found one online, but I wanted to check it out. It was a nine-hour trip. The kids love it.”

The vehicle, which Haug has owned for more than three years now, doesn’t currently have the original engine. But, Haug said he’s currently restoring it.

The American LaFrance has a 200 gallon tank, and the capability to pump 350 gallons of water per minute.

American LaFrance was a noted manufacturer, focusing primarily on the production of fire engines, aerials, emergency apparatus and rescue vehicles – which went defunct in 2014.

“It’s cool to have something like that fire truck around,” said Werner, who serves on the Ste. Genevieve County Ambulance District board, “and give everyone a chance to see it.”

Ste. Genevieve County Community Center recreation director Stephanie Buehler had the idea to bring “Touch a Truck” to the city after being involved with the program down in Cape Girardeau.

“It’s a free community event,” Buehler said. “It’s something different, with heavy machinery, and kids get to see what those people do.”

Kids will sit inside the vehicles, climb on them, and if they are nice – may have the opportunity to honk a horn or sound the siren.

Buehler said she wanted to start “Touch A Truck” last year; however, the COVID-19 (coronavirus) pandemic forced her to scrap the event until now.

“I think people are emerging now from their homes, and this is a way to engage the community in a safe way,” Buehler added.

Here are just some of the vehicles that will be available: community center tractor, Stuppy’s Wrecker Service wrecker, a golf cart and the Air-Evac mediflight helicopter based in Perryville.

The Ste. Genevieve Police Department and Sheriff’s Office also are set to participate, plus there will be fire vehicles on display from here and Bloomsdale.

“This kind of event gives us a