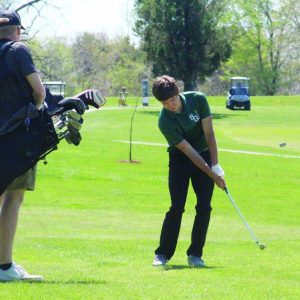 ZELL — The Ste. Genevieve High School boys’ golf team had a simple goal at its own tournament last Wednesday.

That goal? Beat DeSoto in the team standings.

Mission accomplished. In this battle of Dragon golfers, Ste. Genevieve put together a team score of 375 while DeSoto carded a 377 at the 10th Annual Dragon Invitational.

Landon Rose turned in varsity’s low round with an 88, one day after winning medalist honors at a triangular in Farmington with Park Hills Central and Potosi.

“Landon turned it around on Hole No. 9,” Ste. Genevieve head coach Ryan Mueller said. “He managed to bogey the hole, and then go to the back nine where he shined. He’s definitely figured out his game.”

In hindsight, Mueller could have chosen Gavin Huck for the varsity squad; however, he was placed on junior varsity. Huck produced the Dragons’ best round of the day with an 88.

“He missed out on getting a medal with a scorecard playoff,” Mueller noted. “Gavin had an excellent outing. He was striking the ball well, he managed the course correctly and took the minimum strokes to get out of situations.”

Huck finished with five pars and one birdie, on the par-5, Hole No. 9 measuring 467 yards.

None of the Dragons were able to earn individual medals, but the boys still turned in strong scores on a rather cool, breezy day for golf.

Bryce Barley and Luke Basler turned in solid scores with a 91 and 93, respectively. Barley finished his round with five pars, and Basler had four.

Mueller complimented Barley on his putting, while Basler continues to be, perhaps, the most consistent player on the team.

Grant Weiler and Zachary Burr rounded out the Dragons’ scores with a 102 and 103, respectively. Burr earned a chance to play varsity as this was Senior Day, with Rose, Barley, Basler and Burr all recognized.

The Ste. Genevieve junior varsity, thanks to Huck, finished ninth overall on the team ladder (400).

The Dragons finished ahead of varsity teams from four other schools, including Mineral Area Activities Association’s Park Hills Central and Potosi.

North County proved to be the class of the tournament, with a team score of 333 — 24 strokes ahead of Cape Notre Dame.

Four North County golfers placed among the top-10, with Will Claywell the medalist. Claywell fired a 79, three strokes better than teammate Braden Swift and Ethan McClinton of DeSoto.

Swift was second on a match of scorecards.