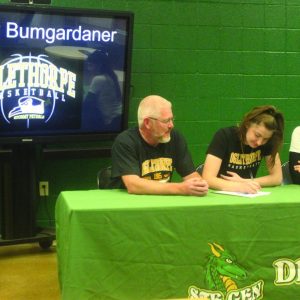 Bumgardaner made it official — signing with Oglethorpe University based in Brookhaven, a suburb of Atlanta, on Friday.

“Oglethorpe found me while I was played on a select team (Magic Basketball Academy) in Tennessee and Oklahoma,” Bumgardaner explained in an email to the Herald.

Oglethorpe is a private liberal arts college originally chartered in 1835, with its most famous athlete being Major League Baseball Hall of Fame infielder Luke Appling.

“I love Atlanta, and the opportunities Oglethorpe presents to its students,” Bumgardaner said.

Bumgardaner said the Stormy Petrel coaching staff has told her she will play either a swing forward or stretch power forward at the school.

Oglethorpe is a member of the NCAA Division III Southern Athletic Association, with the closest school to Ste. Genevieve a few hours south (Hendrix College in Conway, Ark.).

And Bumgardaner will become a rarity — furthering her basketball-playing days into college.

“It’s really special to be able to continue my playing career,” she said. “I’ve played my entire lift, and I’ve always wanted to be able to play after high school. It opens so many doors to be able to travel and gain experiences that will help me in the future.”

Bumgardaner will receive a political science degree from Oglethorpe, while simultaneously earning a degree in pure mathematics from Georgia Tech (also in Atlanta).

Due to the COVID-19 (coronavirus) pandemic, Oglethorpe played a limited schedule with an overall record of 7-2 — losing in the SAC Tournament semifinals to Millsaps (Miss.), 72-58.

Alex Richey serves as the head coach. The team features primarily a mix of players from Georgia and Florida. A Stormy Petrel is a gray, urban bird.

“Sydney is a versatile player who has been able to play several different positions for us over the years,” Walk-Robison said. “She is a great passer, and also has a great read on the ball as a defender under the basket.”

Bumgardaner leaves Ste. Genevieve as the all-time leader in blocked shots with 177 to go with second all-time in rebounds (779), fourth in steals (174) and sixth in scoring (1.018). That, indeed, is versatility.