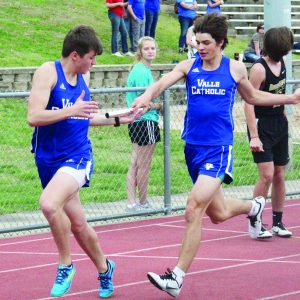 Zoughaib had every reason to smile because both the Warrior boys and girls earned second-place finishes at the Old Settlement Relays.

“We had an awesome day on Friday, and I was very pleased with some of the numbers the kids were achieving,” Zoughaib said.

Valle Catholic placed behind Helias Catholic, a school that drove three hours from Jefferson City to win the entire shabang.

The meet was stopped with three events remaining due to threatening weather conditions.

“We seemed to have personal records in just about everything we did,” Zoughaib added.

Zoughaib said he pretty much has the district line-up all sorted out; but a Ste. Genevieve open meet in less than two weeks time will help even more.

The girls’ 3,200-meter relay dropped 41 seconds from the previous meet, while the boys were 16 seconds better.

The girls’ team, comprised of Mary Roth, Nicole Valle, Rachel Valle and Camryn Basler, was the gold standard with a time of 10 minutes, 50.82 seconds, five seconds faster than a foursome from Helias Catholic.

Ella Bertram continued her betterment in the shot put, marking at 11.52 meters, nearly 1.5 meters better than Ste. Genevieve’s Etta Heller, who came in second. Bertram also was third in the javelin and high jump.