Tom was born on July 2, 1930, in Ste. Genevieve, MO, the son of Alfred and Catherine (Caffrey) Papin where he grew up with 6 brothers.  He attended Valle Grade School and graduated from Ste. Genevieve High School in 1948.  Following high school, Tom served four years in the United States Navy during the Korean War where he enjoyed traveling around the world as well as playing basketball on the Navy team.  Upon discharge from the U.S. Navy, Tom attended and graduated from University of Missouri-Rolla with a degree in Ceramics Engineering. 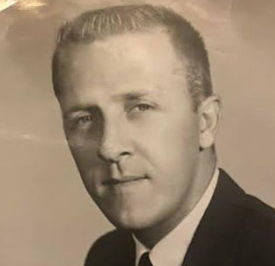 Upon graduation from college, Tom began working for Owens-Illinois Glass Company in Alton, IL, where he met and fell in love with Mary Brueggeman. They married on May 21, 1966 at St. Patrick’s Catholic Church in Alton. He worked so closely with their then client, Anheuser Busch, they eventually invited him to come work for them in St. Louis in their quality control department where he later retired. Tom was a member of St. Ambrose Catholic Church where he was an Extraordinary Minister, usher, greeter, parish council, and basketball coach at many of the area catholic schools; and member of the American Legion in Ste. Genevieve, MO.

Elias, Kallal and Schaaf Funeral Home in Godfrey are entrusted with professional services.

A Memorial Mass will be 10 AM Saturday, April 17, 2021 at St. Ambrose Catholic Church in Godfrey.

Online condolences and guest book may be found at www.eliaskallalandschaaf.com