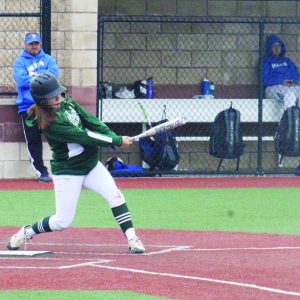 The Ste. Genevieve High School softball team garnered the Silver Bracket at the Old Settlement Tournament this past Saturday at Challenger Field.

However, Valle Catholic’s players could also hold their heads high — playing much better against the Dragons the second time last week.

Ste. Genevieve defeated Valle Catholic 11-8 in a back-and-forth game in which the wind played a major factor in the number of runs scored.

The Dragons blanked the Warriors 13-0 on Monday, April 5, in what proved to be the first installment in the Old Settlement Showdown.

“The Ste. Gen game (Saturday) was a good one for us,” said Valle Catholic head coach Kurt Basler. “We hung with a good team through the whole game.”

The Warriors (4-9) are beginning to “catch up” with good pitchers and taking better at-bats, Basler noted. The quality of teams in the tournament will only help Valle Catholic get better, the coach added.

“It was a very competitive game versus Valle,” Ste. Genevieve coach Russell Toombs said. “Both teams hit the ball well. Valle is getting better every day. They made adjustments.”

Toombs said the Dragons (8-5) were buoyed by the victory over Valle Catholic — then defeating West County 9-7 in the Silver Bracket championship.

“We played our most complete game of the year,” Toombs said. “We played well as a team, and Autumn Basler pitched well in the circle.”

Lincoln allowed just one hit in 3-2/3 innings of work, issuing three hit batters and three walks with one strikeouts. Her pitching line was good enough.

The Valle Catholic combination of Mia Weiler and Macy Wolk allowed 11 runs (all earned) on 15 hits with six walks in six innings of work.

Earlier in the game, Valle Catholic took a 6-5 lead after Ade Weiler laced a line drive to center field — scoring sister Mia Weiler. Addisyn Heberlie singled to score Kelsey Blum and Ade Weiler, and the Warriors were up 8-5.

That’s when the Dragons rallied to win.

The Weilers and Blum all had two hits apiece for Valle Catholic, which included Kelsey’s triple. Mia Weiler and Blum also scored twice.