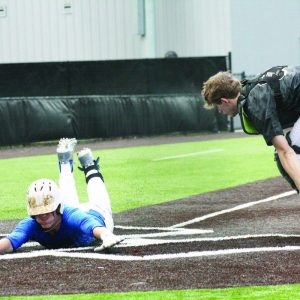 Capaha Field is an NCAA Division I facility, home of the Southeast Missouri State University Redhawks.

The Warriors enjoyed the cozy confines of playing there, winning both of their games on Saturday — whitewashing Doniphan 14-0 first, followed by a 16-4 conquest over Portageville.

The games were originally scheduled to take place in Portageville; however, heavy rains on Friday evening forced them to be played elsewhere.

“Any time you get a chance to play on a day when most teams had to cancel, you feel fortunate,” Valle Catholic head coach Nathan Gegg said. “Add in the fact we got to play at a really awesome field on the campus of a major Division I university, it makes it that much sweeter.”

Gegg said the Warriors (10-3) responded to the big-time atmosphere providing two of their most complete performances of the year.

Valle Catholic had to adjust to all types of pitching, from 80 mph down to salad-tossing 50 mph. The wind howled in from left field, which didn’t help matters any. Still, the squad persevered to score 30 runs in two games.

Carter Hoog, Isaac Roth and Collin Veath combined to throw a shutout against Doniphan — striking out six and walking two in five innings.

“On the mound, we attacked the zone, and made everyone earn their way on,” Gegg said.

Fallert was 3-for-4 with three runs scored, and Okenfuss continues to be a swing well in the bottom of the lineup — going 2-for-2 with three RBI. Nathan Schwent and Heberlie both pushed across two runs.

Hoog powered a grand-slam home run in the romp over Portageville, Burnett slapped his second triple in as many games and Gegg earned the win after the Warriors scored 10 runs in the fifth.