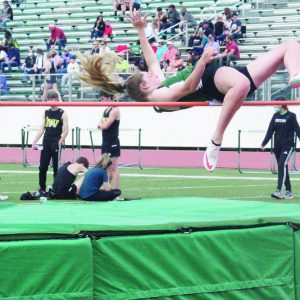 Ste. Genevieve High School senior Megan Aubuchon continues to be the benchmark in the high jump.

Aubuchon now has the school record all to herself after a 1.68-meter leap this past Friday at the Old Settlement Relays at Dragon Field.

“Megan’s doing a lot of things right,” said Ste. Genevieve head girls’ track and field coach Tyne Huck. “She’s driving her knee, getting up and bending over the bar.”

When Huck watched Aubuchon establish her new school record, she said Megan could have easily cleared a few more millimeters.

Skies began threatening after Aubuchon earned those gold medals, and the meet was aborted with boys’ open 3,200-meter run and two other events remaining.

Still, it was a strong outing for the Dragons — with the girls taking third place overall in the team standings, and the boys were sixth.

The Dragon girls excelled in the field, with Marysa Flieg shattering her own school record in the javelin, Etta Heller posting a silver-medal performance in the shot put and Maggie Myracle coming through with a bronze in the discus.

Flieg posted a mark of 40.43m in the javelin, a dominating performance that was more than 10m better than Lucy Stokes from The Whitfield School. Ella Bertram of Valle Catholic was third (27.05) and Heller fourth (25.99).

Heller marked at 9.94 in the shot put, behind Bertram. Myracle’s mark in the discus was 25.80m, about 4.5m behind winner Breanna White of Perryville.

Ste. Genevieve fared well in the 3,200-meter relay, with the foursome posting a time of 11:02.39 for third place overall. Valle earned gold in a time 12 seconds faster.

Huck added Gwen McKlin, the younger sister of former Dragon trackster Julia McKlin, to the distance relay group — and she fueled the group to that third-place finish.

Middle distance runner Taylen Bader has proven to be a welcome addition to the boys’ roster this season.

Bader earned a silver medal in the 800-meter run with a time of 2:09.03, which was one half of a second in back of Noah Voss of Helias Catholic.

“Taylen works hard, along with the rest of the distance crew,” Dragon head boys’ track and field coach Corey Samples said. “Those guys push each other, and have a healthy competition amongst each other. Taylen’s hard work is starting to show at meets.”

Samples had the boys experiment during the meet, and the Dragons managed another season-high point total.

The 3,200-meter relay quartet was second overall with a time of 8:46.22, 12 seconds slower than a foursome from Helias Catholic.

Austin McBride rounded out the top-3 finishes for boys, grabbing bronze in the discus with a mark of 34.43m, about 3.4m behind gold medalist Marshall Long of Fredericktown.