And the Warriors gave a fine accounting of themselves competing against many schools from much larger classifications at the Ste. Genevieve Invitational.

Valle Catholic’s boys and girls both finished fifth in their respective team standings in this, the first of several meets at Dragon Field this season.

Warriors’ head coach Samer Zoughaib said he was proud of how the boys and girls handled adversity — with wind chill temperatures in the 30s. 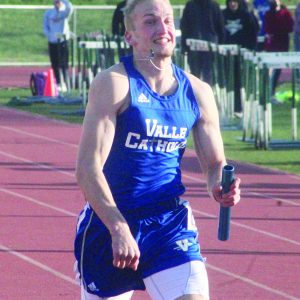 “The kids ran as well as possible, when it felt like 32 degrees,” Zoughaib said. “We represented our school well. The numbers will drop, and we will jump farther and higher.”

This marked the first counted meet for the Warriors since May 2019, before last year’s entire slate was wiped out due to the COVID-19 (coronavirus) pandemic.

“The kids were really excited to get a meet in,” Zoughaib said, noting how Valle’s Class of 2020 was unable to compete.

“When you are Class 1 competing with Class 4 and Class 5,” Zoughaib added, “I look at the numbers compared to Class 1 in the state. Where we finished is the least of my concern.”

On the girls’ side, Ella Bertram was the gold standard in the shot put, going 10.3 meters, .11 meters better than Emma Duennne of Cape Notre Dame. Bertram also earned fifth in the discus with a toss of 23.69m.

(Keep in mind, events are now measured in metric equivalents.)

Hailey Wiebrecht was fifth in the long jump with a leap of 4.39 meters, and she sixth in the triple jump — marking at 8.7 meters. Teammate Callee Naeger was eighth in the high jump (1.22m).

Jordan Bales and Sam Drury both provided the Warriors points in the 300-meter high hurdles, with respective fifth- (47.15) and seventh-place finishes (47.75). Eli Fallert was in a tie for eighth place in the pole vault (2.44m),