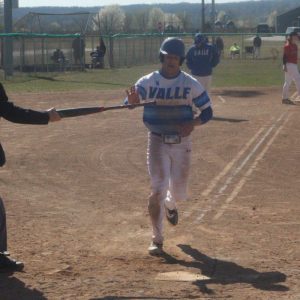 But, Okenfuss did what hitters in the No. 9 hole should do; he successfully flipped the lineup back to the top spot held down by Jayden Gegg.

Okenfuss, with the Warriors down 2-1 and one out in the fifth, legged out an infield hit and Gegg drove him home.

“It was a brand new ball game,” Gegg said. “I think tying it up allowed everyone to take a deep breath.”

Drew Bauman opened up the Warrior’s sixth inning with a double, but he was still standing on second base with two outs.

Okenfuss singled on a ball to left field, scoring Bauman to give the Warriors a two-run lead (4-2). That set the wheels in motion for Valle Catholic to push across six total runs during the frame.

Coach Gegg made the decision to use three pitchers through the game, Austin Burnett, Chase Fallert and Gegg all seeing time on the bump.

The coach did this so every pitcher would be available for this past Monday’s home doubleheader versus Christian Brothers College and Gateway Legacy Christian, respectively.

These games took place took place during the press run for the April 7 edition of the Herald. See scores on our newspaper’s social media feeds.

Burnett, Gegg and Fallert combined for seven strikeouts and just three walks. Gegg didn’t allow any runs during his three-inning stint, and Central could only muster four hits.

Coach Gegg said he was pleased with how the Warriors handled plate approaches as the game went along — taking advantage of swirling winds to score plenty of runs.

“I thought we swung the bats really well,” Gegg said, “and we did a great job of adjusting the strike zone to attack pitches that were giving us fits early in the game. We made a lot of loud outs, but rather than get frustrated, I thought our demeanor remained positive and eventually we were able to break through.”

Okenfuss finished 3-for-4 with three runs scored and one RBI. Jayden Gegg scored four times. Fallert was 4-for-5 with four RBI, including two doubles.

University of Missouri-bound Aiden Heberlie contributed a 2-for-5 hitting performance (both doubles) with two RBI.