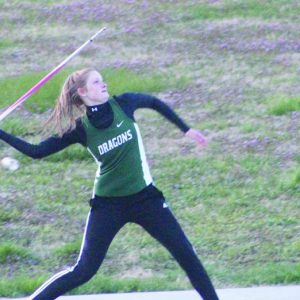 Javelin specialist Marysa Flieg, a Southeast Missouri State University pledge, had one of the them.

Flieg marked at 38.91 meters in her specialty, proving to be the gold standard Dragon Field.

Marysa played a game of “beat the clock,” throwing the javelin just before the sun went below the hilly horizon.

“Marysa had a great all-around day,” Ste. Genevieve head girls’ track and field coach Tyne Huck said. “She was getting into the upper 120s (upper 30s in meters) in javelin, and running some of the best times we’ve seen from her this year so far.”

Huck has taken note of Flieg’s gains, and the same could be said for classmate Megan Aubuchon, who tied the school record in high jump with a leap of 1.65m.

“Watching Megan tie the high jump record was exciting,” Huck said. “Not only because she gets her name up on the record board again, but because that’s something has been working toward her entire track career.”

Aubuchon also garnered the 100 hurdles in a time of 16.57 seconds, more than a second faster than Potosi’s Annie McCaul. She also was tops in the 300 hurdles (47.45), with McCaul finishing second again.

Flieg added a third-place finish in the 800 run (2:43.28), while teammate Karissa Holst sprang to a mark of 2.1 meters in the pole vault — good enough for fifth.

The Dragons excelled in the shot put with Etta Heller and Jamison Kemper “doubling up” on points. Heller was third and Kemper fourth with respective marks of 9.58m and 9.5m. Heller also was fifth in the javelin (27.13).

On the boys’ side, the Dragons continue to make the mark in distance running events — including the 3,200-meter relay quartet of Devin St. Clair, who runs the anchor after Levi Wiegand, Taylen Bader and Nathan St. Clair.

The foursome clocked in with a time of 8:48.21, which was about 6.5 seconds behind event winner The Whitfield School.

“Devin’s a leader on that team,” first-year head boys’ track and field coach Corey Samples remarked. “They gel well; they all get along together.”

Such cohesion was on display in what’s considered scholastic track’s most grueling relay. The girls’ quartet placed third in the same event (11:08.93).

Teammate Ashton Irwin scored two points for the Dragons with a seventh-place mark in the pole vault (2.59m). Nolan Walls was seventh in the triple jump, hopping along with mark of 10.9m.