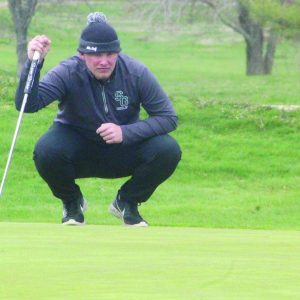 FARMINGTON — The Ste. Genevieve High School boys’ golf team capped the week with a strong performance at the North County Tournament on Wednesday.

Conditions were challenging due to chilly northerly breezes, with golfers teeing off from the blue tees at St. Francois Country Club, measuring 6,011 yards.

Ste. Genevieve carded a composite score of 367, which was good enough for third in a field of 14 teams.

Depth has been one reason for the Dragons’ success early on this season.

“Our boys’ golf program has increased numbers significantly,” Ste. Genevieve head coach Ryan Mueller said. “We have a total of 21 golfers, six on varsity and 15 on JV. I believe thirds has been a strong reason why our varsity players have been doing so well.”

Mueller said there are plenty of JV players pushing for varsity spots, and some are even playing golf in non-mandatory settings as a means to improve.

He was especially proud of the Dragons’ skill during the North County Tournament.

“The final day of our long week, we were able to keep all of our scores under 100 for our team score,” Mueller noted.

Bryce Barley recorded his personal-best score with an 87 and a top-10 finish.

Landon Rose fired 90, Grant Weiler 94, Luke Basler 95 and Kellen Hogenmiller with a 107. Basler tied his personal-best score. Rose was 10th overall, and Weiler 13th, with both of them receiving medals for their diligence on the course.

North County was the overall winner, recording just 326 strokes, with Farmington second (356) and then the Dragons.

In all, the Dragons played 45 holes in three days, what a crunch.