The Valle Catholic High School baseball team wrapped up last week with a home doubleheader on Saturday at Alumni Field.

It was a chore just to get Alumni Field ready for games after drenching rains fell earlier in the week.

“Sometimes you have to do a lot of hard work to be able to play, and that was the case Saturday,” Valle head coach Nathan Gegg said. “I can’t thank our staff and volunteers enough for the effort they put in allowing us to get the opportunity to play.” 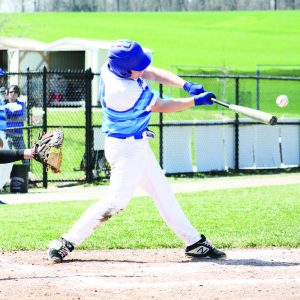 Oran proved to be a stern test for the Warriors, who stand at 4-3 on the season.

“Oran is always a strong program,” Valle Catholic head coach Nathan Gegg said. “We saw their best pitcher, and he was very good. They were extremely disciplined at the plate, and battled to put balls in play in tough situations. They were the better team.

Five of Oran’s 10 hits came while they were down in the count no balls and two strikes. Gegg also said the Eagles fared well by connecting on several two-out hits.

Valle Catholic cut Oran’s lead to 2-1 in the bottom of the third as Chase Fallert ripped a triple to left center field scoring Jayden Gegg, who earlier doubled.

Oran pushed across four runs in the top of the fourth — chasing Valle starting pitcher Jayden Gegg — and the Eagles made it hold up.

The Warriors scored twice more in the seventh. A second Gegg double brought home Michael Okenfuss with a run. Fallert then blasted a double to score Gegg. However, Aiden Heberlie popped out to end the game.

Fallert finished the game going 2-for-4, with hits going for extra bases. Gegg and Heberlie also were 2-for-4. The bottom of Valle’s line-up didn’t generate much offense — save for two walks issued to Josh Bieser.

He allowed three earned runs on six hits with three strikeouts and four walks on 100 pitches.

Earlier in the day, Carter Hoog was the winning pitcher in a 13-3 dismantling over Southern Reynolds of Ellington.