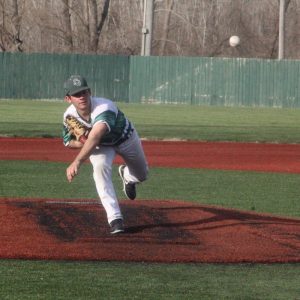 Those were two parts to the puzzle last Wednesday as the Dragons dominated visiting Perryville 15-1 at Yanks Field.

“There are always things we can take away from each of our games,” Ste. Genevieve baseball coach Michael McDaniel said. “I thought we had good approaches at the plate, and our defense played well.”

McDaniel also chimed in about Selby’s strong performance. Selby also struck out five and walked only two in five innings of work.

“Nathan did a pretty good job of pounding the strike zone,” McDaniel noted. “His pitch count (82) was a little higher than we would like it to be, so that’s something we need to work on as the season goes on.”

The Dragon offense also went to work, scoring six runs in both the first and third innings — followed by three more in the fourth.

Selby shut the door on Perryville in the top of the fifth, inducing the mercy rule to end the game.

Ste. Genevieve suffered a pair of losses last week, falling 13-1 to Fox in Arnold on Saturday and the Dragons lost to Farmington in a 7-5 thriller on Monday, March 22.

Fox opened with a nine-run frame in the first, which Ste. Genevieve couldn’t recover from.