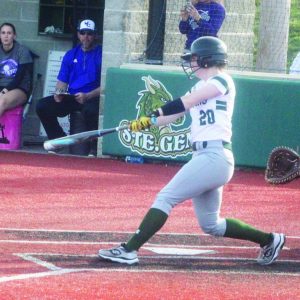 Bailey Deck smacked her second straight home run in as many games to help lift the Dragons (1-2).

“Bailey has had a great start to the season at the plate,” Toombs said regarding the right fielder. “If she gets a ball in the zone, she can hit it a long way. Getting her to be patient and adjust to the change-up will be key to her continuing the early success she has had.”

Deck produced four RBI as part of a 2-for-4 performance, with two runs scored.

Autumn Basler pitched the seventh inning, picking up the win for the Dragons — striking out the side in the process.

“It was nice to get a game in on Saturday to try and forget about the sting from the West County loss,” Toombs added. “The girls were aggressive early, and we got out to a nice lead.”

Ste. Genevieve played West County on Wednesday, March 24, at Leon’s Field, with the Bulldogs scoring four runs in the seventh to win 9-7.

The Dragons’ Zoe Cook was tagged out during a rundown between third base and home plate to end the game — squashing what had been a two-run rally.

Izzy Basler went 3-for-3 with a pair of runs scored versus West County, while Deck and Schwent both had two RBI.

Cook scored Ste. Genevieve’s lone run in the season-opener at Potosi on Monday, March 22, as the Trojans downed the Dragons 10-1.