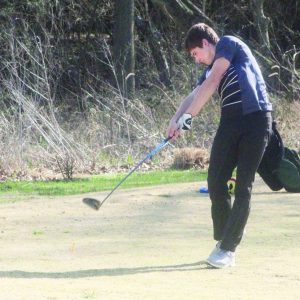 ZELL — Now that’s how to start a season.

“It has been awesome to see our varsity and junior varsity performing this well right out of the gate,” Ste. Genevieve head boys’ golf coach Ryan Mueller said.

“To start 4-0 on the season for both teams has boosted our golfers’ mentalities quickly and helped our mental game on the course,” Mueller added.

Ste. Genevieve encountered its first tournament play this past Monday, with the varsity at the Cape Notre Dame Invitational at Dalhousie Golf Club in Cape Girardeau while the JV unit went to Windsor.

What’s more, different Dragons are shooting well on different days — which means Ste. Genevieve should have plenty of depth for the long season ahead.

Grant Weiler was the medalist during a triangular on Monday, March 22 versus St. Pius X and Windsor. Weiler carded a 43, with Landon Rose next at 48.

“Grant and Landon excelled in both outings by being able to shoot in the 40s,” Mueller noted.

During last Wednesday’s triangular versus Perryville and St. Vincent, Bryce Barley was the team’s low score with a 42.

The teams played from the front-nine at SGGC, which measures 3,169 from the white tees.

Luke Basler also fared well for Ste. Genevieve, firing a 46, nine strokes lower than his nine-hole round on March 22.

Zachary Burr made his regular-season debut last Wednesday in the triangular versus the Perryville-based schools.

Gavin Huck has provided Ste. Genevieve with a pair of 48s for the lowest score among junior varsity golfers.