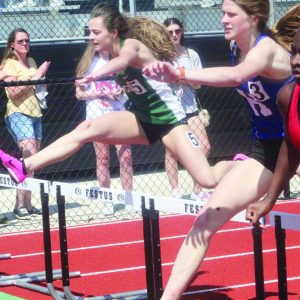 FESTUS — The competition was tough; however, there were still bright spots for Ste. Genevieve High School boys’ and girls’ track and field teams.

Scoring points wasn’t easy, especially when the field featured a dominant host school in Festus plus Hillsboro and St. Louis University High on the boys’ side and Parkway Central and Eureka girls’ squads.

“We came out and put up some good numbers,” Ste. Genevieve head girls’ track and field coach Tyne Huck said.

Future Central Methodist University competitor Aubuchon was the gold standard in the high jump at 1.57 meters, 0.05 meters better than Maya Wright from Hillsboro.

“Megan has decided this year is her year,” Huck said. “I told her to just jump and go, and she did.”

Keep in mind, all Missouri scholastic track and field meets are using the metric system rather than standard customary United States measurements.

Flieg, soon to be throwing for Southeast Missouri State University, placed third in her specialty — the javelin. Flieg recorded a mark of 35.68 meters, with Elizabeth Bailey from Eureka the top mark at 40.99 meters.

Maci Reynolds and Aubuchon helped the Dragons double up in points in the 300-meter hurdles, with third- and fourth-place finishes respectively.

Karissa Holst earned seventh place in the pole vault — springing to a mark of 2.28 meters.

On the boys’ side, Ste. Genevieve’s 3,200-meter relay quartet of Mason Gegg, Nathan St. Clair, Devin St. Clair and anchor Levi Wiegand clocked in with a time of 8:46.31 — which was good enough for fifth place and four points.

“Our track team competed against some schools a lot bigger than us,” Ste. Genevieve head boys’ track and field coach Corey Samples said. “Our team put in a great effort. There were athletes competing in new events for us, and they stepped up. We are starting to see these efforts, and hard work rewarded.”

The Valle Catholic High School track and field team will be making its official season debut today at the Ste. Genevieve Invitational.

Both running and field events will begin at 4 p.m. today at Dragon Field. There will not be preliminaries in the field events — with each participant receiving four attempts.