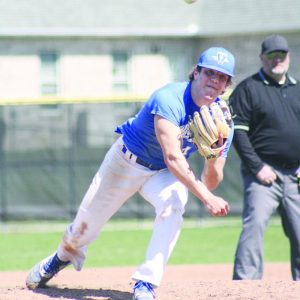 Burnett allowed just one Fredericktown baserunner — by virtue of a walk — as Valle Catholic belted the Blackcats 17-0 in the Old Settlement Tournament.

The Warriors (2-1) finished tournament play with a home game on Monday at Alumni Field.

“I think there were a lot of positives to take away from our first three games,” said Valle Catholic head coach Nathan Gegg. “Overall, I thought we swung the bats really well. We did not chase, and we were very disciplined in our zones early in the count.”

Gegg also said he was pleased with Valle Catholic’s baserunning. The Warriors still need work on situational defensive plays, but that will come with more repetitions.

The Old Settlement Tournament was in danger of not happening due to heavy rains that affected the region last week.

However, Jackson stepped up to serve as a tournament host — moving games from Valle Catholic’s Alumni Field.

“After not playing a high school game in 22 months, we just wanted to play some ball,” Gegg said. “We were thankful for the opportunity to play three games. We just wanted to see our guys compete again.”

Compete they did, scoring a whopping 40 runs in three games, while allowing 12 runs — which included Burnett’s complete-game no-hitter.

Overall, Burnett fanned 10 Fredericktown batters. Offensive highlights were a two-run single from Isaac Roth in the second inning and a two-run doubles from University of Missouri pledge Aiden Heberlie and Burnett.

On Saturday morning, Valle Catholic faced a tall order in Jackson, with a pressure-packed batting order and pitchers throwing in the mid-80s.

“Those are the type of arms we need to see, and assess where we need to get better,” Gegg said. “I thought we did a great job battling those guys, and getting seven runs on them.”