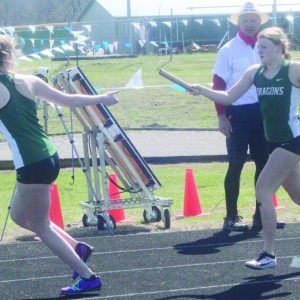 That talent was full display Saturday at the season-opening Frozen Invitational on the Cape Notre Dame Regional High School campus.

“To place third as a team this early in the season was very exciting,” said head girls’ coach Tyne Huck. “We saw a lot of good competition, and put up some good results because of it.”

The Ste. Genevieve boys excelled most in the distance medley relay, placing 11th overall in the team standings with 16 points.

Huck said this is the earliest in March the Dragons have had a counted meet.

Aubuchon was the gold standard in the high jump with a leap of 1.57 meters, taking top honors based on fewer misses over Delta’s Kendall Hollweg.

Maggie Myracle came through with a fourth-place finish in the discus, marking at 26.35 meters, roughly four meters behind Festus thrower Taylor McMillan.

Continuing in the field, Flieg marked at 38.81 meters to win gold in her expertise — the javelin. Teammate Etta Heller was sixth (26.42m). Heller and Jamison Kemper were fifth and seventh, respectively, in the shot put with marks of 9.17 and 9.03m.

Ste. Genevieve’s Austin McBride powered through for a fifth-place finish in the discus with a mark of 33.64 meters, about six meters behind inner Ian McPherson from Northwest Cedar Hill.

Wrapping up the meet, Ste. Genevieve’s girls claimed a silver medal in the 1,600-meter relay with McKlin, Flieg, Aubuchon and Reynolds clocking in at 4:30.56.

Meanwhile, the Dragon boys’ foursome of Nolan Walls, Bader, Jack Farlow and Wiegand was seventh (3:55.13), also in the 1,600-meter relay.