Many local historic preservationists have lamented the loss of the circa 1848 Francis Rozier House on North Main Street, razed in April 1960.

It has been a parking lot since then. The brick home was similar to the Felix Rozier, built by Francis’ brother next door – until recently housing the Inn St. Gemme Beauvais.

Greg Ferguson of Audubon Redevelopment approached members of the Ste. Genevieve Heritage Commission on March 15 about adding a structure about where the Rozier mansion had stood.

Rather than a replica of the German brick home formerly there, Ferguson would like to build a replica French Colonial structure to supplement Audubon Bar and Grill operations across the street.

Ferguson, along with Jim Ferguson and Herb Fallert, showed the members some drawings of what they had in mind and sought feedback on the idea.

Greg Ferguson said they were not seeking approval at that time.

He said Audubon’s closed eight years ago in January and was closed for a two-year restoration. The restaurant was the first phase. The second phase involved the  conversion of the basement into Cellar 56, with “that Speakeasy kind of look to it.”

The hotel reopened in August 2018 as the third phase, going from 13 rooms to seven rooms, which he called “absolutely gorgeous.”

“We’ve taken our time with each one of these,” he said, making sure each was just right.

“I think it’s one of the jewels of Ste. Genevieve,” he said.

He noted that during COVID-19, they had introduced outside dining on the Merchant and Main Street sidewalks.

“That became a magnet for people,” Ferguson said. “They felt comfortable. We put out patio heaters. We had people sitting out there when I wanted a coat and blanket on.” 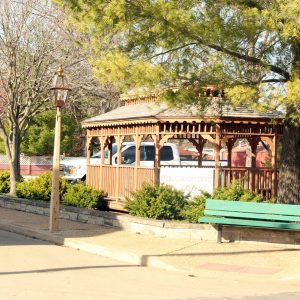 He said Audubon’s has one of the largest parking lots in the historic district.

“We had questions … based on what type of structure would be acceptable …. What is considered traditional. Are we looking at structures that match the 1700s history of this particular area?”

He wondered if that type of structure would be acceptable.

He said instead of building a replica French Creole structure, then later landscaping the parking lot, that they might instead take a different approach.

“We were looking at putting  in extensive landscaping in our parking lot and putting a smaller structure initially that will attract people …. that would sell food and drink and to establish along Main Street, a landscaped area that would include seating. We talked about almost pavllion-like structures.”

He said they did not have a structure designed to show to the group yet. They had drawings of the eventual full-blown French Colonial structure, but not the initial structure.

He said the goal is to come up with “something that would really beautify that downtown parking lot area.”

He hopes it will be  “a diamond right there,” at Main and Merchant, to augment the attractive historical district.

He asked what the members thought would be appropriate – both in style and in material.

“I think we’re still looking at a structure very, very similar to that picture,” he said.

He quoted one of the local historic preservation ordinances that says “parking should be minimized.”

Ferguson thinks it would help the city brace for a renewed, post-COVID tourist influx.

“Folks, they’re coming,” he said. “If COVID gets behind us, we’re going to see a lot of people in downtown Ste. Genevieve.”

He stressed that whatever they wind up doing will be done well.

“We take pride in that Audubon brand,” he said.

He said they had questions to be answered first, including permissible sizes for such a building.

If a small structure is initially built, chair Casey Benner asked whether it would be torn down to build the larger structure.

“Not necessarily,” Ferguson said. “It would probably be an addition.”

Later on, Myers agreed that “The town desperately needs it.”

He warned them not to cut costs on windows and shudders.

“The early people weren’t just throwing up buildings,” he said. “They were real craftsmen.  If you get a look at some of the  older stuff and it’s well done.”

He noted that the proposed design has only a handful of features, thus making each feature that much more important for its appearance.

Ferguson noted that by the second phase, the larger building should include a fireplace and a porch.

He said they will return to the commission with specific plans for Phase Two, after the first phase is completed.

Commission member Nicole Boyer suggested possibly making the early, smaller structure look like the traditional outbuildings behind some of the older homes.

Ward 1 Alderman Gary Smith said he loved that idea and encouraged them to consider using evergreens as part of the landscaping.

It was also suggested that the current gazebo in the parking lot could be moved elsewhere. Smith said he would support that idea.

The commission agreed that materials similar to what would traditionally be seen were acceptable.

Jason & Ashley Stackle received approval for a certificate of appropriateness to replace to replace the existing aluminum and glass commercial front doors with a residential metal and glass double door at 502 N 3rd.

The commercial storefront, built in 1905, is on the corner of Third and LaHaye. The southwest corner has an angled entry bay.

While the interior has undergone alterations, at times housing apartments, the exterior has remained largely unaltered.

“We would like to take the aluminum storefront doors out and put a steel and glass door in to go along with our theme,” Jason Stackle said.

It passed by a 4-0 vote, without discussion.

NEW ROOF ON 5TH IS APPROVED

Steve Wallen’s request for a certificate of appropriateness to replace an asbestos tile roof with an architectural shingle roof at 118 N 5th was also approved by a 4-0  vote after scant debate.

In January, Wallen had received approval to replace the asbestos tile roof with a standing-seam, hidden-fastener metal roof on a house at 118 N. 5th Street. He also received a certificate to replace the existing wooden windows with white vinyl windows on the circa 1900 home.