Aiden Boyer scored on the play — and thanks to relievers Nathan Selby and Carter Klump — the Dragons opened the season with a slim 8-7 victory over North County at Yanks Field.

However, Ste. Genevieve followed that win with a pair of losses against tough opposition on Saturday, first to the St. Louis Patriots, 8-2, and then DeSoto, 8-6.

“We had some good things happen, and some bad things, through our first three games,” Ste. Genevieve head baseballcoach Michael McDaniel said.

McDaniel said the Dragons are still searching for the leadership.

“It’s still early in the season, so we’re hopeful someone will be that guy that helps hold everyone else accountable,” McDaniel added.

McDaniel said even though the Dragons are off to a 1-2 start, the team was blessed to begin the season — especially considering many Missouri schools were rained out last weekend. 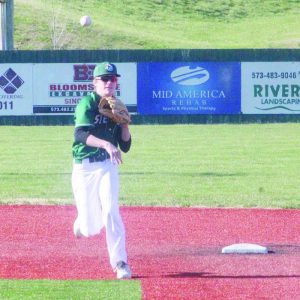 Athletic directors and coaches from Ste. Genevieve, Valle Catholic and Jackson juggled the schedule to make the tournament work for everyone.

“In regards to wins and losses, we hoped to be better through three games,” McDaniel noted. “Being able to shuffle the tournament around to get in games was fantastic. We were able to get in some games to see what’s working and what we need to address moving forward.”

Ste. Genevieve wrapped up the tournament on Monday with a home game against Farmington.

In the win over North County, Zach Boyer allowed three earned runs and nine hits over four innings of work. He struck out two and walked two.

Nathan Selby was an innings eater, working 2-1/3 innings before Carter Klump picked up the save.