“It was never meant to be generational,” Snyder told an audience at Ste. Genevieve City Hall Saturday. “It was a means to an end.”

After spending 36 years in manufacturing, Snyder decided to make a move.

He had owned a farm for some 20 years, on which an overgrown family cemetery was located.

“Even though it wasn’t our family our feeling was, we own those property; those people did the hard work so we can live the way we do today; we’re standing on their shoulders and we need to respect that. So we started cleaning the cemetery up.”

He saw a magazine article about a California, Missouri farmer named Wayne York who had started a company, repairing broken tombstones.

“Monument companies typically focus on granite,” Snyder said. “We focus on older stuff, turn of the century and older, which is marble and sandstone. So it’s a whole different set of skills.” 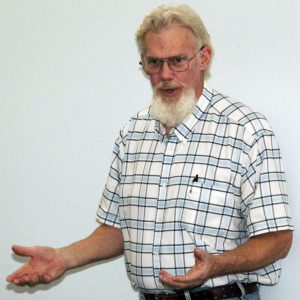 Snyder contacted York and went down to work with him and learn the ins and outs of stone restoration.

York suggested he start his own company.

“We were able to take the foundation that he made and then take it to the next level,” Snyder said.

The business, which has included Snyder’s son and three daughters over the years has had to develop various means of picking up fallen (often buried) stones, patching, gluing and cleaning stones and remounting them. They have had to invent many of their own specialty tools and come up with formulas for safe cleaning formulas. (Regular pool chlorine, two tablespoons per gallon, is very effective in cleaning off mold and fungus, yet does no damage.)

Snyder showed slides of many stones they have repaired and cemeteries they restored. He said the originally handled cleaning out brush and other parts of cemetery restoration. They have since focused primarily on tombstone restoration.

He described several jobs he has worked on, including the old homestead of legendary Missouri figure Sterling Price.

He also restored the long-lost stone of the founder of New Bloomfield, Missouri in a cemetery there that had been unearthed by high school students during a cemetery-cleaning project.

In Florida, Missouri, Snyder found the buried tombstone of the infant son of the doctor who delivered that town’s most famous resident, Samuel Clemens, better known as Mark Twain.

He noted that Jacob’s Ladder doesn’t do a lot of stone cleaning anymore. He typically does workshops on it, to teach local enthusiasts how to do their own cleaning.

“I don’t feel right charging people to do what they could do themselves,” he said.

Instead the unearthing of buried stones and stone repair is what Jacob’s Ladder primarily focuses on today.

While in town, he toured Ste. Genevieve’s historic Memorial Cemetery with members of the Foundation For Restoration of Ste. Genevieve, the group that put on the talk. He indicated that he could  provide help in the organization’s ongoing effort to preserve and restore the historic burial ground that closed in 1881.