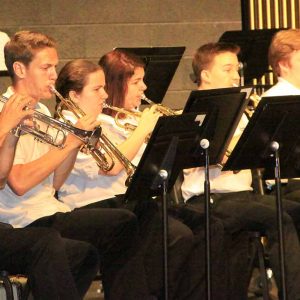 Strike up the band.

Donze was one of two speakers to make a personal appearance before the board of aldermen during its regularly scheduled meeting.

“That’s the plan,” Donze later said in a telephone interview with the Herald on Friday evening regarding whether or not there would be set performance schedule for the summer of 2021.

Donze, himself a drummer and percussionist, also serves as the group’s sound technician.

The Ste. Genevieve Municipal Band will have its first performance at 8 p.m. on Thursday, May 27, in the Valle Catholic Desert.

Performances last one hour, Donze reported. The group will perform for 10 straight weeks through July 29 – with one exception.

The group will have a special Independence Day show on July 4 in Pere Marquette Park, coinciding with a gala fireworks presentation.

That means there will no July 7 concert.

The municipal band also has a second group called the German Band, which typically performs six Saturdays during the summer at the pergola on the corner of Main and Merchant Streets.

There also will be a German Band performance this coming Memorial Day during the daytime at the VFW Hall on Memorial Drive.

The German Band also performs during the opening ceremonies of the annual town celebration Jour de Fete in August.

The municipal band, funded by city property taxes, also provided a financial report during the aldermanic meeting. The group’s cash balance as of Dec. 31, 2020, was $66,187.03,

The organization also provides grants for musical performances not involving the band.

There were three grants totaling $4,000 last year, one for the Saturdays in Ste. Genevieve program and others for the French Centre For Colonial Life and the holiday festival featuring Creole fiddle player Dennis Stroughmatt.